Published by C. Diep, Apr 19, 2022
The beer industry is an integral part of beverage manufacturing in Japan. While the country is well-known for its high-quality clear liquors such as rice wine (sake) and fruit liqueurs, beer stands at the top of alcoholic beverage production. The success of the brewed beverage is further boosted by the competitive landscape formed by large Japanese breweries. The domestic competition coupled with strict liquor tax laws impede the market entry for outside competitors and small business ventures. At the same time, major breweries are expanding their product lines with low-priced alternatives to their core products. However, changing consumer and regulatory trends impacted the market growth in recent years, as domestic beer production reached a decade-low.

At the end of the 19th century, Japanese beer production started with the founding of the predecessors of current market leaders Kirin Brewery Company, Sapporo Brewery, Asahi Breweries, and Suntory Beer. While the corporations have since then expanded their business portfolios, the manufacturing of alcoholic beverages remains their core business segment. Especially Asahi Group Holdings, Japan’s largest beer manufacturer, generates the lion’s share of its revenue within the alcoholic beverages segment through the distribution of beer and beer-like beverages. To circumvent progressive tax hikes and liquor tax reforms, the industry leaders have been continuously expanding their product lines with beer-like beverages.
According to Japanese liquor tax laws, products classified as ‘beer’ refer to beverages with a malt content of 50 percent or more. Permitted additives during production are limited to rice, corn, sugar, and starches. Consequently, to avoid the higher tax rate on beverages categorized as ‘beer’, Suntory produced the first low-malt beer (happoshu) with a malt content below the threshold of general beers. As lawmakers followed up with tax hikes on beer-like malt beverages, ‘new genre beer’ was introduced as a malt-less alternative. Typically referred to as ‘third beer’ (daisan beer), the beer-like beverage succeeded happoshu as a staple product in the Japanese beer market.

Beer-like beverages remain the liquor of choice among consumers, with inexpensive, widely available products catering to the demand of the wide mass. Within the straightforward market, microbreweries struggle to assert their positions. The number of registered microbrewers has been showing an upward trend in Japan, but beer production is mostly operated as a side business by beer halls, restaurants, and other manufacturers of alcoholic beverages, with liquor tax laws limiting the annual production volume to two thousand kiloliters of craft beer. As such, craft beer products are not enjoyed regularly, and consumption is predominantly tied to food and drinking establishments.
Furthermore, the opportunities for microbrewers to appeal to a wider audience are shrinking as major beer brewers are introducing their new craft beer lines through subsidiaries and associated businesses. Additionally, to reform the liquor tax system and align the tax rates of beer and beer-like beverages, the Japanese government raised tax rates on happoshu in 2018, with gradual tax increases for beer-like beverages planned in 2023 and 2026. This measure effectively hampers the growth of small-scale brewing and the consolidation of new competitors.

In the following 6 chapters, you will quickly find the 27 most important statistics relating to "Beer industry in Japan". 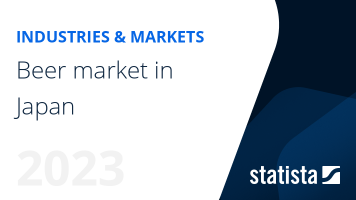 The most important key figures provide you with a compact summary of the topic of "Beer industry in Japan" and take you straight to the corresponding statistics.