Published by Statista Research Department, Apr 1, 2022
The Australian craft beer industry has become an ever-expanding section of an Australian beer market that has long been dominated by the country’s big beer brands and major breweries. Imported beers and popular brands like VB, Carlton, Tooheys, and XXXX remain as some of the most consumed beers in the country but Australians are also developing a taste for locally owned and brewed beers. Over the past decade, the number of independent and craft breweries in Australia have multiplied to almost 300 brands and their success has not gone unnoticed. Many multinational beverage companies now sell their own brands of craft beer in the Australian market or have acquired independent breweries as part of their market portfolio.
In part, the beer industry’s success can be attributed to the number of consumers of alcohol in the country; in 2019, a total of 82 percent of Australian adults said that they consumed alcohol. However other data indicated that Australians, overall, are drinking less alcohol than in previous years. Given that the industry’s value appears to be increasing year-on-year, this drop in alcohol consumption strongly suggests an increasing trend in preferences for quality over quantity. This would also reflect the pricing of craft beer, which can be significantly higher than most standard beer brands.

The craft beer industry in Australia is valued at more than 150 million Australian dollars and is estimated to be increasing by five to ten percent each year. The highest concentration of craft beer drinkers in Australia are in New South Wales and Victoria which also boast a higher concentration of breweries, retail outlets and metropolitan areas than other states and territories. Most craft beer drinkers are aged between 30 and 39, and a significantly higher proportion are male rather than female.

Australia's overall beer production in 2019 was the highest in the Australia / Oceania region, with the country producing a total of 16.1 million hectoliters; compared to around three million in the same year that New Zealand produced. Australians also exhibited a preference for stronger beers; consuming 64.4 liters of high strength beer per capita but only 18.75 liters of middle strength brews. However, the zero Alcohol beer market is gaining traction and popularity with no-alcohol versions of popular brands like Carlton Zero.

Australian consumers appear to be welcoming of new and exciting products within the craft beer segment of the Australian beer market, threatening the market share of established and mainstream brands. As the craft beer sector continues to grow, no alcohol beers, craft ciders, and even hard seltzers are also becoming serious contenders which may further disrupt the commercial beer market.

In the following 5 chapters, you will quickly find the 25 most important statistics relating to "Craft beer in Australia". 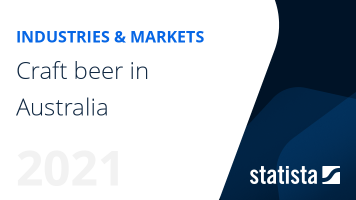 The most important key figures provide you with a compact summary of the topic of "Craft beer in Australia" and take you straight to the corresponding statistics.