Published by Statista Research Department, Nov 17, 2022
The financial technology sector, also known as fintech, is a growing industry that focuses on developing innovations to improve the delivery of financial services and their use by everyday consumers. It comprises segments such as digital payments, big data, investments, and alternative finance. In the Americas, the number of fintech startups was estimated at nearly 11 thousand at the end of 2021, around 87 percent larger than the number of companies registered three years before. Within the continent, Latin America hosted more than 2,300 of these initiatives, mostly working in segments such as payment and remittances, and lending. In a region with high internet user penetration and many barriers to financial inclusion , new businesses have plenty of room to provide financial solutions to a big unbanked, yet online, population.

The leading countries in Latin America by total number of fintech startups are some of the regions’ largest economies based on gross domestic product: Brazil, Mexico, and Argentina. Brazil and Mexico also concentrate most of the investments targeting fintech companies, with over 6 billion U.S. dollars gathered in 2021. In Brazil, the monthly active users of all leading neobanks increased significantly in 2021. Whereas in Mexico, the companies Konfío, Clip, and Covalto are among the startups that were able to raise the largest amount of funds during investment rounds, with no less than 300 million U.S. dollars received by each one as of August 2022.

Fintech usage has been growing during the past decade in Latin America, which can be seen, for instance, by the rapidly increasing number of finance app downloads. In Brazil, the number of finance app downloads increased by 274 percent in the last three years, while in Mexico, the number of downloads more than tripled. The need for easy-to-use, digitally accessible, and reliable financial solutions has perhaps never been more apparent as under the current global circumstances. Digital payments was estimated to be the fintech segment most widely used in the region, accounting for nearly eight out of 10 users in 2022. Although smaller in size, personal finance, neo-banking, and alternative lending are also present within Latin America’s fintech solutions, with Nubank as a clear successful example. This Brazilian company is the largest digital bank in Latin America, and one of the largest in the world.

In the following 5 chapters, you will quickly find the 29 most important statistics relating to "Fintech in Latin America". 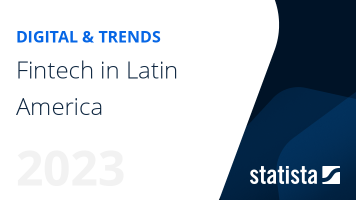 The most important key figures provide you with a compact summary of the topic of "Fintech in Latin America" and take you straight to the corresponding statistics.