Mate tea – or simply mate, as it is mostly called in its region of origin – has been around for centuries. This infusion drink is brewed from the leaves of yerba mate (Ilex paraguariensis), a plant native to South America. It was first consumed by the Guaraní people, an indigenous community that settled alongside the Paraguay and Uruguay rivers. From being prohibited as a vicious habit in the 1700s, the ritual of preparing and sharing mate has since expanded over a large part of South America, as well as across the Atlantic Ocean, reaching Europe and Western Asia.
In present times, mate enjoys its own official day on November 30 in Argentina and Uruguay. In 2020, a cold version of the infusion created in Paraguay and known as ‘tereré’ was categorized as Intangible Cultural Heritage of Humanity by UNESCO. And in terms of international trade, yerba mate generates an annual surplus of more than 70 million U.S. dollars in Latin America.

The kings of yerba mate

Yerba mate production has historically been dominated by Argentina and Brazil. But as the latter turned into a global heavyweight in coffee production, Argentina became the largest yerba mate producer in the world. In 2019, the country harvested more than 830 thousand metric tons of mate leaves, the highest output registered in the decade. Argentine mate production is mainly located in the northeastern provinces of Misiones and Corrientes. By traded volume, Argentina is the largest yerba mate exporter in the world, but when it comes to exported value, Brazil takes the lead.

From South America to the world

Although Argentina is the largest producer of yerba mate, and the beverage has even been officialized as the national infusion, Uruguayans are its most loyal consumers. The annual per capita consumption of mate in Uruguay surpasses eight kilograms, while in Argentina each person consumes an average of 6.5 kilograms per year. The infusion has also gained popularity worldwide. In 2019, Syria was by far the main country of destination for Argentine mate exports, receiving more than 31 thousand tons of the ground herb. Meanwhile, exports of yerba mate from Paraguay have Spain as their main destination.
This text provides general information. Statista assumes no liability for the information given being complete or correct. Due to varying update cycles, statistics can display more up-to-date data than referenced in the text.

Eloise Trenda
Research Expert covering global food topics with a focus on the French, Spanish, and LATAM markets
Get in touch with us now
Published by Eloise Trenda, Jan 14, 2022

Imports by other countries 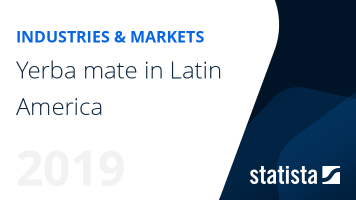 The most important key figures provide you with a compact summary of the topic of "Yerba mate" and take you straight to the corresponding statistics.