Published by
T. Ozbun,
Aug 5, 2022
Agriculture is one of the most important economic sectors in Latin America. Brazil, with its extensive land area, abundant sunlight, and natural resources, is certainly no exception. The agricultural sector represents more than four percent of the annual value added to Brazil’s gross domestic product, and accounts for a nine percent share of the total employment in the country. In 2019, domestic crop production alone injected over 360 billion reals into the Brazilian economy.

A global force in crop production

Occupying over 8.5 million square kilometers, Brazil is one of the largest countries in the world based on area. With approximately one third of its land area used for agriculture, the nation stands out in the cultivation of grains, particularly cereals, beans and oilseeds. Soybean production in Brazil, which accounts for over one third of the national crop output value, was forecast to surpass 120 million metric tons in crop year 2019/20, overtaking the U.S. to become the largest global soybean producer. Brazilian corn production also ranks amongst the highest in the world.

Despite intervals of continual decrease in sugar cane production in recent years, the crop remains one of the main agricultural products in Brazil in terms of output value. In addition to its importance for sugar production, sugar cane is also used as the main feedstock for ethanol fuel production in the country. With the Brazilian biofuels industry experiencing a sustained growth since the 2000s, sugar cane has become a particularly strategic crop among the wide variety of agricultural commodities the country provides to the world.

Livestock farming is also one of the chief segments in Brazil’s agricultural sector. With meat products ranking only behind soybean in terms of agribusiness export value, production needs to keep up with market demands. The number of slaughtered cattle in Brazil has been continuously increasing in recent years, surpassing 32 million heads in 2019. However, the largest livestock segment in Brazil is by far poultry. In 2019, nearly six billion broiler chickens were slaughtered in the country – a number equivalent to 75 percent of the global human population.

In the following 7 chapters, you will quickly find the 34 most important statistics relating to "Agriculture in Brazil". 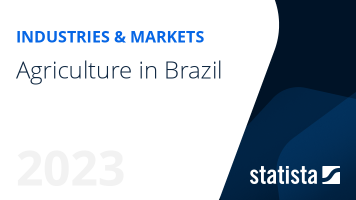 The most important key figures provide you with a compact summary of the topic of "Agriculture in Brazil" and take you straight to the corresponding statistics.