There are few crops in the world able to claim such a global and undisputable popularity as coffee. Despite the plant being discovered in Ethiopia centuries ago, in modern days the global coffee scene revolves around Latin America. Coffee is a big market in the region, as many countries both produce and heavily consume it. In fact, Latin America accounted for nearly 60 percent of worldwide coffee production in 2019.

Brazil is by far the largest global producer of coffee, with more than double the production of runner-up Vietnam. Throughout the years, Brazilian coffee production has remained relatively stable. Despite the biennial effect in harvest, in which production yields are very high one year, and comparably low in the following, the country's output has consistently remained above 40 million 60-kilograms bags per year since the beginning of the decade. And despite the focus on foreign trade, which makes Brazil the largest coffee exporter in the world, the country’s consumption has also been continuously increasing in the past years.

Colombian coffee on the rise

Colombia, on the other hand, has seen a strong increase in production in recent years, with the annual coffee output nearly doubling between 2012 and 2015. This has consolidated the nation as the second largest coffee producer in the Latin American region. In terms of consumption, although still shy in comparison to production, figures have been annually increasing. Consumption was forecast at some two million bags in the 2019/20 marketing year, approximately 15 percent of the national production. Roasted ground coffee was preferred by Colombians over soluble coffee, representing around three quarters of the consumption volume.

Similarly, Honduras has shown a rapid increase in green coffee production since 2016, reaching in recent years an output comparable to that of Ethiopia. Regardless of their considerably smaller land area, Honduras and other Central American countries, such as Guatemala, Nicaragua, Costa Rica, and El Salvador stand out as leading producers in Latin America.

Eloise Trenda
Research Expert covering global food topics with a focus on the French, Spanish, and LATAM markets
Get in touch with us now
Published by Eloise Trenda, Jan 14, 2022 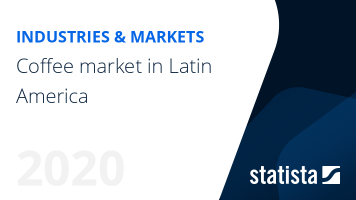 The most important key figures provide you with a compact summary of the topic of "Coffee industry in Latin America" and take you straight to the corresponding statistics.