Palm oil is the most extensively produced kind of edible oil around the world. It is a component of many everyday products, such as lipsticks, pizza dough, instant noodles, shampoo and ice cream. Extracted from the fruit of oil palm trees, it is mainly produced in Indonesia and Malaysia. However, some Latin American countries such as Guatemala and Colombia are also among the leading providers of palm oil in the world.
Within the region, the main producer of palm oil is Colombia. In 2018, the area planted with palm oil trees in the country reached a total of 541 thousand hectares, resulting in 1.63 million metric tons of crude palm oil. That translates into nearly one billion U.S dollars worth of the product . Locally, most crude palm oil is sold to the edible oils and fats industry. However, it is also sold to other industry sectors, such as that of soaps and biodiesel. The rest is exported. This has resulted in Colombia being the fourth major exporter of palm oil in the world, with the Netherlands as its major market of destination.

When it comes to consumption, in addition to Colombia, Brazil and Mexico are the biggest markets in Latin America. In 2019, Brazilians consumed an estimated 750 thousand metric tons of palm oil, of which more than half was used for industrial purposes. One of the most important Brazilian companies in the sector is Agropalma. With a workforce of thousands of workers, it produces not only palm oil but also other derivatives, such as kernel palm oil extract and oil palm fiber.

In contrast, the palm oil industry in Mexico is considerably smaller than that of Colombia and Brazil. However, the country has a high consumption demand, resulting in an increase on planted area. In addition, the North American country imports millions of dollars’ worth of palm oil, making it the main importer of the product in Latin America, and Colombia’s fourth major export destination. Mexico’s main import partners also include other countries within the region, such as Costa Rica, Guatemala and Nicaragua.

While the Latin American palm oil market has a size of billions of U.S. dollars, the massive use of this product is causing worldwide environmental and social problems. Extensive cultivation of oil palm trees destroys rainforest ecosystems and the natural habitat of a wide variety of animal species. In addition, the industry has a large carbon footprint which largely contributes to global warming. To promote more sustainable and ethical practices in this sector, organizations such as the Roundtable on Sustainable Palm Oil (RSPO) have emerged. In Latin America, at least 340 thousand hectares planted with oil palm trees were certified by the RSPO . In order to be certified, plantations have to follow certain social and environmental standards, providing the consumer with a more sustainable and ethical product.
This text provides general information. Statista assumes no liability for the information given being complete or correct. Due to varying update cycles, statistics can display more up-to-date data than referenced in the text. 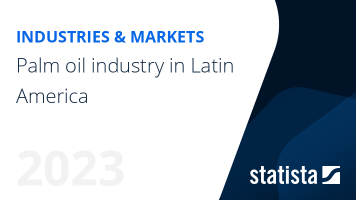 The most important key figures provide you with a compact summary of the topic of "Palm Oil Industry Latin America" and take you straight to the corresponding statistics.