Vodka and beer are two beverages which best describe and dominate the Polish alcohol market. Thus, it comes as no surprise that beer sales reached nearly 18 billion zloty and vodka sales increased by 3.2 percent in 2020, compared to the year before. Moreover, annual Polish household spending on alcohol has been on the rise, reaching over 51 billion zloty in 2020. Taking these figures into account, it can be concluded that the alcohol market is one of the most thriving in the country.

Is non-alcoholic beer a trend among Poles?

In the last decade, Poles adopted two new trends in their alcohol consumption: preference for non-alcoholic beer products and choosing alcohol quality over quantity. These conclusions can be drawn when looking at the year-on-year change in alcohol production, as well as the value of the luxury alcohol market in Poland. Non-alcoholic beer was the undisputed leader when it came to production value, recording a total growth of 54.1 percent in 2020. At the same time, the luxury alcohol market is estimated to reach over 1.3 billion zloty in 2025, with premium spirits constituting the largest segment of the market.

Poland has a vast range of trading partners. While European Union countries remain the leading importers of Polish beer, the number one importer of Polish spirits is France – the value of exported spirits reached nearly 86 million U.S. dollars in 2021. On the other hand, wine produced in Poland is most enjoyed by Russians. In 2021, Poland exported wine products worth rouglhy 41 million U.S. dollars to the neighboring country. In terms of imports, the United Kingdom is Poland’s favorite trading partner when it comes to buying spirits from abroad. As for wine, Poles enjoy Italian flavors the most. In 2021, Italy exported over 34 thousand metric tons of wine to the Slavic country.

Alcohol is consumed by 10 percent of Poles on a daily basis, with the consumption frequency prevailing among men. Higher consumption levels and frequencies lead to alcohol addiction. Regionally speaking, the Silesian (Śląskie) Voivodeship had the most individuals with alcohol related problems for which a court application was issued. Almost half of the Polish population perceive alcohol abuse as a rather big issue in society.

At the beginning of 2019, the Polish government decided to introduce a three percent increase to the existing excise tax on alcohol and tobacco, effective from January 2020. As a result, the price of strong alcohols increased on average by 17.7 percent in 2021. The Polish population is rather divided when it comes to further increase in excise tax on alcoholic beverages, with every second person opposing the idea.
This text provides general information. Statista assumes no liability for the information given being complete or correct. Due to varying update cycles, statistics can display more up-to-date data than referenced in the text.
Published by G. Wanat, Jun 17, 2022

Volume of the alcoholic drinks market in Poland 2013-2025, by segment 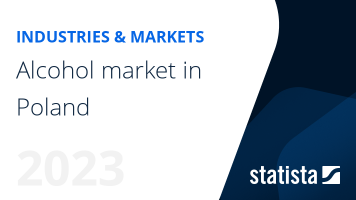 The most important key figures provide you with a compact summary of the topic of "Alcohol market in Poland" and take you straight to the corresponding statistics.