Published by
Eloise Trenda,
Sep 30, 2021
Winemakers need to follow many rules and regulations to produce a sparkling wine that can earn the name "Champagne," the most important of which being that it should be produced in the Champagne region, in France. From grape-pressing to fermentation, almost every step of the production process is regulated. What is more, only three specific types of grape (Pinot Noir, Pinot Meunier, and Chardonnay) can be vinified. Most likely due to this beverage’s international fame, the land devoted to these grapes' cultivation increased greatly between the 1950s and 2010. Since then, the production surface has remained stable, around over 33,000 hectares.
Farmers have had to adapt to climate change, which has been impacting yearly harvests in recent years. For example, some winegrowers have put a "reserve system" in place. It is used to compensate for the unpredictable variations in crop yield from one year to the next and be able to meet market demands. Regarding the production of Champagne, the reserve stock of grapes has remained above the 210 million kilograms mark since 2016 (equivalent to between 184 and 227 million bottles). The value of such measures is made clearer when looking at the volume of Champagne exported by France which averages at one million hectoliters per year.

Appreciated worldwide, Champagne is also enjoyed in its native land, ranking third on the population’s list of favorite alcoholic beverages. In 2019, French people purchased over 709 billion euros worth of this beverage in hyper and supermarkets, with an average budget of 16-30 euros per bottle.
Another key to Champagne’s lasting success is its rarity: its consumption is associated with celebrations and often reserved for special moments. In France, while the consumption of alcoholic beverages per capita has fallen quite sharply since the 1960s, Champagne is the only type of drink where consumption has remained stable and even increased slightly.

In the following 5 chapters, you will quickly find the 31 most important statistics relating to "Champagne in France". 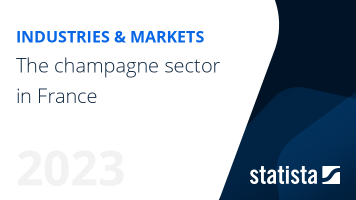 The most important key figures provide you with a compact summary of the topic of "Champagne in France" and take you straight to the corresponding statistics. 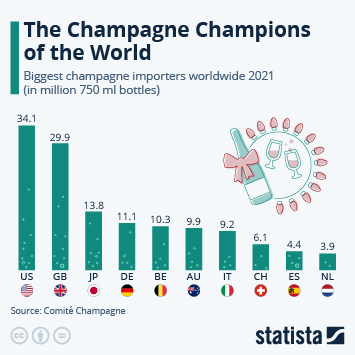