Published by S. O'Dea, Mar 29, 2021
Satellite internet is not new, but the technology is making headlines like never before. SpaceX’s rapid deployment of Starlink satellites, satellite broadband company OneWeb’s emergence from Chapter 11 Bankruptcy, and constellation proposals from other major companies have attracted global interest.
The rate of launches carrying internet satellites is unprecedented. Since the first large-scale deployment of Starlink satellites on May 24, 2019, SpaceX has conducted a further 23 launches, carrying a total of 1,383 Starlink satellites. Starlink went from having zero presence in space to accounting for one quarter of all active satellites in less than two years, a clear signal of Starlink’s rapid growth.

An emerging constellation of operators

While Starlink’s planned constellation of 12,000 satellites is the largest, they are by no means the only major player. In the coming years, the number of low earth orbit (LEO) satellites is set to increase dramatically as more companies reveal their plans. British company OneWeb began its launch program in February 2019, but was forced to cease operations when the company filed for relief under Chapter 11 of the U.S. Bankruptcy Code. The UK Government and Indian firm Bharti Global bought OneWeb as a consortium in July 2020, putting the company back on track.

OneWeb successfully carried out its first launch since the buyout on December 18, 2020, bringing the total number of OneWeb satellites launched to 110. OneWeb’s long-term plans include a constellation of 6.372 satellites, and the company hopes to begin commercial services within a year.

Amazon is moving ahead with ‘Project Kuiper,’ gaining the required approval from the United States Federal Communication Commission (FCC) to create a broadband satellite constellation containing 3,236 satellites. Samsung has previously announced plans for a 4,600 satellite constellation, Telesat plans to launch the first of their 298 satellites in 2022, and Boeing is also developing a constellation.

Total investments are unclear, but SpaceX and Amazon have both indicated the cost to eastablish a constellation could amount to 10 billion U.S. dollars.

What impact will this have?

When each constellation is complete, internet connectivity provided over LEO satellites will have a significant impact for consumers – especially those in remote locations – businesses, and government users. Starlink is already providing a limited-service and accepting pre-orders for Starlink kits in several countries, with customers in the United States paying 99 U.S. dollars a month for their connections.

The implications for areas with poor internet infrastructure are significant. Starlink customers connect to the internet using a Starlink receiver, tripod mount, and router, which do not require specialized equipment or training to install. Therefore residents and businesses in remote or poorly serviced areas could immediately access the internet at speeds comparable to fiber connections. In-flight connectivity (IFC) is another promising area for satellite internet. OneWeb announced in March 2019 that the company signed an agreement to develop an IFC terminal that would deliver a ‘home-equivalent’ broadband experience in-flight.

While a sky full of satellites is good for internet users, astronomers have expressed concern that the increased number of objects in orbit is already interfering with scientific observations. The reflective surfaces of satellites have interfered with telescope images, and the use of radio spectrum also has the potential to cause disruption.

Furthermore, telecommunications companies including AT&T and DISH have expressed concerns that the satellites could cause interference to their own operations, including Direct Broadcast Satellite receivers.

For now, the FCC and the International Telecommunications Union are working with all parties to find satisfactory outcomes, and SpaceX is currently developing satellites with non-reflective surfaces to try and rectify problems faced by astronomers.

The potential benefits of LEO broadband satellites are significant. The United Kingdom alone is home to 100,000 homes and businesses in hard-to-reach areas that experience limited internet connectivity. Other nations with geographical challenges, such as the scattered islands that make up the Philippines, could also benefit from the increased digital participation that fast broadband enables. A key to extracting maximum benefit will be regulators, businesses, and affected interest groups coming together to find solutions to the emerging concerns.

The most important key figures provide you with a compact summary of the topic of "Satellite internet" and take you straight to the corresponding statistics. 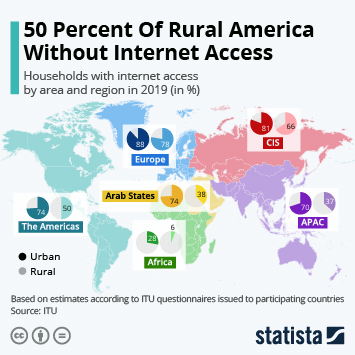