Published by
Julia Stoll,
Aug 4, 2022
Europe’s television landscape is as dynamic and diverse as its population. Over the past few years, revenues of the European TV and home video market have remained stable, and while segments such as advertising took a visible hit due to the onset of the pandemic, television remains one of the leading sources of news and entertainment for millions of people. The number of TV viewers in Europe continues to grow steadily, and despite mounting competition from online streaming services, viewership peaked at 715 million in 2021. But while TV penetration rates keep rising, traditional TV consumption is slowly declining as viewing habits and preferences continuously evolve.

Television remains an attractive advertising platform as popular shows or sports events can draw massive audiences to the screen. In 2021, TV ad spend in Western Europe amounted to approximately 28 billion U.S. dollars. But while an upswing is forecast for the Western European countries, ad spend in Central and Eastern Europe is expected to decrease by nearly 24 percent from 2021 to 2022 as major international advertisers have withdrawn from the Russian market.

Public or government-funded TV is highly popular throughout Europe. In 2020, the BBC remained the UK’s leading TV broadcaster with an audience share of around 32 percent, and in Norway, viewership for the Norwegian Broadcasting Corporation (NRK) even reached 43 percent amid the pandemic. During the past decade, European audience shares for public service TV have generally ranged between 30 to 40 percent, depending on the country.

Pay TV is battling a global cord-cutting trend. Forecasts suggest that the number of pay TV subscribers in Western Europe will decrease for the foreseeable future. In Germany and the United Kingdom, for instance, it is expected to decline by over one million between 2022 and 2027. In Eastern Europe, the total number of pay TV households also continues to drop and is forecast to reach 74 million by 2027 compared to over 80 million pay TV households in 2018. But while the number of digital pay TV subscribers will grow, analog cable will probably completely disappear from the market.

Europe’s TV landscape is gradually being transformed by the advance of video streaming solutions. Thanks to the ongoing adoption of connected TV (CTV), advancements in digital video delivery, and growing demand for individualized content, viewers in many European countries now opt for non-linear video streaming options. According to a recent survey, online TV is particularly popular in Ireland, with 34 percent of respondents watching it every day. While there are distinct regional differences in the availability and usage of digital video content, there is a visible trend towards VOD content in Europe.

In the following 5 chapters, you will quickly find the 35 most important statistics relating to "Television industry in Europe". 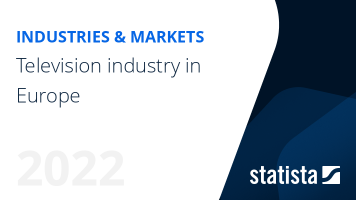 The most important key figures provide you with a compact summary of the topic of "Television industry in Europe" and take you straight to the corresponding statistics.