During the pandemic worldwide snack consumption shot up across all categories. The most common reason for people to snack was the sense of comfort they experienced from indulging. People also snacked to relieve boredom, reward themselves, boost their mood, and to relax. After 2020, revenue growth for snacks is expected to slow. Any small portion of food eaten between the three daily meals can be considered a snack, however, there are some products that are more commonly associated with snacking than with regular meals. For example, global yearly consumption of cookies and crackers amounts to multiple kilograms per person, but few would eat them for breakfast, lunch, or dinner.

Besides confectionery and other sweet snacks, one of the big subcategories of snack food are savory snacks. Overall, savory snacks have a global market value of over 250 billion U.S. dollars. The biggest product in the savory market are potato chips. Not only do consumers eat multiple kilograms of potato chips, but they also spend billions on them. The worldwide potato chip market has reached a size of over 35 billion U.S. dollars. Most of these snacks are sold in packaged form and only a minor share of sales is accounted for by unpackaged potato chips.

As with other food categories, snack food products can more likely than not be traced to a variety of larger food conglomerates. For example, Oreo, which are very popular in the U.S., are a product of Mondelez. However, the company is only a minor player compared to the market leaders. The worldwide market leader among snack and bakery companies is Nestlé which makes over a hundred billion U.S. dollars in sales annually. Nestlé is followed by PepsiCo, which for example owns Frito-Lay, the leading U.S. vendor of potato chips and other snack foods. The United States remains the biggest individual market for snack foods. On a regional scale, North America is surpassed as the biggest market of savory snacks by the Asia-Pacific region, which is expected to be an even bigger market in the future than it is now.
This text provides general information. Statista assumes no liability for the information given being complete or correct. Due to varying update cycles, statistics can display more up-to-date data than referenced in the text.
Published by Statista Research Department, Sep 23, 2022

Market distribution of the global savory snacks market 2019 & 2026, by region

Revenue of the confectionery & snacks market worldwide 2021, by country 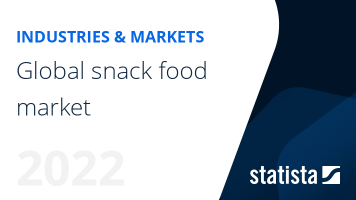 The most important key figures provide you with a compact summary of the topic of "Global snack food market" and take you straight to the corresponding statistics.