Drug use and abuse remains a very real problem in many parts of the world, although the extent of the issue varies greatly depending on culture, access, and legislation. In 2018, the estimated number of illegal drug users worldwide was almost 270 million. Furthermore, among these users, 35.6 million could be considered “problem drug users” or categorized as having a drug use disorder. Cannabis is the most commonly used illegal drug worldwide, followed by opioids and opiates. As of 2018, high estimates determined that around five percent of the global population consumed cannabis in the last year. However, the number of opioid users worldwide has increased by more than any other drug category over the past few years.

Where is cannabis legal?

Cannabis, also known as marijuana, is by far the most used and widespread illegal drug around the world. In 2018, the estimated number of cannabis users worldwide hit 250 million. Laws regarding the use and sale of cannabis vary significantly by country. Several have legalized cannabis for medicinal purposes, while some, including Canada and certain states in the U.S., have completely legalized the sale and use of recreational marijuana. Each country of the European Union has different laws regarding marijuana. Some have decriminalized it and have legalized medical marijuana, but others still have harsh drug laws that may lead to prison time. No EU country has yet to fully legalize the sale and use of cannabis to the extent seen in the United States or Canada. Nevertheless, the latest analysis of drug use in the European Union shows that nearly 30 percent of the region’s population has used cannabis in their lifetime, with 7.6 percent using the drug in the last year. The European countries that report the highest prevalence of cannabis use include Spain, France, and Italy.

The threat of opioids

Opioids refer to synthetic and partly synthetic prescription drugs such as hydrocodone and fentanyl, as well as natural opioids like heroin or morphine, also known as opiates. Used by many to relieve pain, it was estimated that the number of opioid users worldwide was around 76.4 million in 2018, with the highest number of users found in Asia. However, the drugs have gained wider media coverage in recent years due to the ongoing opioid epidemic in the United States. There has been a significant increase in opioid abuse and overdose death brought about by misleading information from pharmaceutical companies and irresponsible prescribing behavior from physicians in combination with an increase in cheap heroin and the rise of synthetic opioids such as fentanyl. In 2019, the number of opioid overdose deaths in the U.S. was approximately 50,000. Neighboring Canada is also experiencing an opioid crisis. As is the case in the United States, the misuse of fentanyl is a serious public health problem, highlighting the dangers of these widely available and highly potent synthetic opioids.
This text provides general information. Statista assumes no liability for the information given being complete or correct. Due to varying update cycles, statistics can display more up-to-date data than referenced in the text.

John Elflein
Research expert covering health and health care
Get in touch with us now
Published by John Elflein, Apr 20, 2021

High estimate of the percentage of people worldwide who used cocaine in the past year
0.51%

Global population share of illicit drug use 2020, by drug 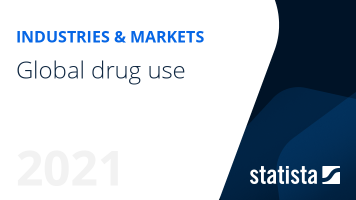 The most important key figures provide you with a compact summary of the topic of "Global drug use" and take you straight to the corresponding statistics.