Opioid use in the U.S. - Statistics & Facts

Published by
John Elflein,
Mar 31, 2022
Opioids are narcotic drugs that affect the nervous system and act as a pain reliever. They include synthetic or partly synthetic drugs that mimic opiates, such as heroin. Common prescription opioids include codeine, fentanyl, hydrocodone, morphine and oxycodone. While opioids are a common and effective method of treating severe and chronic pain, long term use and abuse can lead to addiction, physical dependence and withdrawal symptoms. Opioids are some of the most commonly abused drugs worldwide, with user numbers exceeding those of cocaine and ecstasy.

Over the last decade, the United States has seen an increase in deaths related to heroin and prescription opioid abuse. Although these numbers have decreased in recent years, deaths due heroin and prescription opioid abuse remain real problems, while the introduction of new synthetic opioids such as fentanyl have compounded the problem of opioid abuse in the U.S. The spike in the use of heroin and abuse of prescription opioids along with the rise of new synthetic opioids has led many to claim that the U.S. is currently going through an opioid epidemic. Access to cheap heroin and the ease of receiving prescriptions for opioids have been seen as causes of the epidemic. The similarity between heroin and opioids also encourages addicts to use these two drugs as alternatives for each other; when an opioid addict finds it difficult to receive a prescription for opioids, heroin can provide a cheap and accessible alternative.

A recent survey from 2019 found 16.1 percent of individuals 12 years and older in the U.S. felt it was easy to obtain heroin, compared to 17.5 percent in 2016. Although the dangers of heroin use are well known, the number of people who consumed heroin increased over the past decade, reaching a high of 948,000 people in 2016. However, this number has decreased in recent years with an estimated 745,000 people in the U.S. consuming heroin in 2019. It is estimated that around 376,000 adults aged 26 years and older in the United States are currently dependent on or abuse heroin.

In the following 7 chapters, you will quickly find the 52 most important statistics relating to "Opioid use in the U.S.".

The most important key figures provide you with a compact summary of the topic of "Opioid use in the U.S." and take you straight to the corresponding statistics.

Opioid epidemic in the U.S.

Drug use in Canada 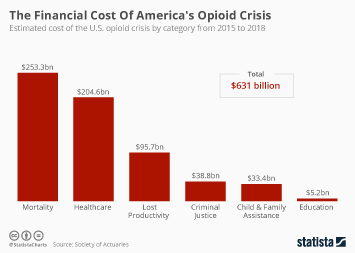