Published by J. Clausnitzer, Jul 29, 2022
The Finnish government strongly restricts the sales of alcoholic beverages. Alcoholic beverages with an alcohol content higher than 5.5 percent are only allowed to be sold by Alko, a government-owned liquor store chain. In 2020, Alko's sales increased due to the coronavirus (COVID-19) pandemic, whereas alcohol sales in bars and restaurants declined.
The private consumption expenditure on alcoholic beverages in Finland has increased over the past few years. Based on preliminary data, the household consumption expenditure on alcohol peaked at nearly 3.78 billion euros in 2020.

Among the alcoholic drinks sold in Finland, there are many imported beverages. In recent years, the alcohol import value has been growing steadily. However, it decreased to roughly 340.15 million euros in 2020. In the same year, the export value of alcoholic beverages also declined to approximately 123.1 million euros – the lowest value since 2010.
The Consumer Price Index (CPI) of alcoholic beverages in Finland increased steadily in the observed time, after stagnating from 2014 to 2017. In 2021, the CPI for alcoholic beverages measured at 123.02, where the base year 2010 equals 100. This index measures changes in the average costs of most consumer goods and services. It records inflation and deflation (rising and falling prices).

As Statista Consumer Market Outlook forecasts, the prices of alcoholic beverages will increase in the next few years. By 2025, spirits will reach an average price of 57.83 euros per unit. At the same time, the average volume of alcoholic beverages consumption per capita is forecast to decline, with average volume of wine consumption per capita amounting to 11.9 liters in 2025.

In the following 7 chapters, you will quickly find the 35 most important statistics relating to "Alcohol industry in Finland". 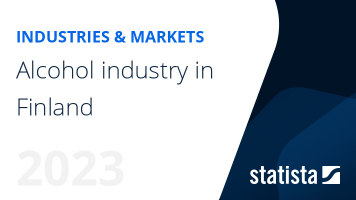 The most important key figures provide you with a compact summary of the topic of "Alcohol industry in Finland" and take you straight to the corresponding statistics.