In Sweden, the sales of alcoholic beverages are strongly restricted by the government. Beverages with an alcohol content higher than 3.5 percent are only allowed to be sold by Systembolaget, a government-owned chain of liquor stores. Within the past years, the revenue of alcoholic beverage retail sales increased constantly in the Scandinavian country, amounting to almost 44 billion Swedish kronor in 2019. Among the alcoholic drinks sold, there are many beverages that were imported into Sweden. The import value grew strongly to roughly 12 billion Swedish kronor in 2020, while the exports valued at around five billion Swedish kronor. In general, Swedes’ alcohol consumption stays fairly stable between the months; the consumer price index (CPI) of alcoholic beverages did not change significantly from December 2019 to December 2020. In December 2020, the index value of alcoholic beverage prices was measured at 329.93, where the year 1980 equals 100. This index measures changes in average costs of most consumer goods and services. It records inflation and deflation (rising and falling prices).
In the domestic retail trade, sales revenue of beer, wine and spirits increased overall in recent years. Annual wine sales revenue rose year-on-year over a decade from 2009 to 2019, peaking at around 23 billion Swedish kronor. By comparison, for beer, sales revenue amounted to roughly 12 billion Swedish kronor that same year and for the sales of spirits, the retail trade generated almost eight billion Swedish kronor. Most of the sales were made in Systembolaget stores - in the first quarter of 2020, beer was the most sold alcoholic drink, reaching a volume of roughly 55 million liters. Wine followed, ahead of spirits. Cider and alcopops were the category with the least sales in the stores of the Swedish beverage retailer.

Beer was not only the most sold alcoholic drink in Systembolaget stores, it also seemed to be the favorite beverage containing alcohol among consumers, based on a consumption volume of about 460 million liters as of 2018. In second place came wine, reaching a volume of approximately 242 million liters and in third place followed spirits with a consumption volume of more than 26 million liters.
This text provides general information. Statista assumes no liability for the information given being complete or correct. Due to varying update cycles, statistics can display more up-to-date data than referenced in the text.
Published by M. Ridder, Jul 22, 2021 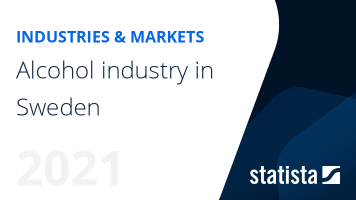 The most important key figures provide you with a compact summary of the topic of "Alcohol industry in Sweden" and take you straight to the corresponding statistics.