Published by Statista Research Department, Jul 15, 2022
The UEFA European Championships (EURO) 2020 was originally scheduled to take place from June 12 to July 12, 2020, but, due to the coronavirus (COVID-19) pandemic, it was decided on March 17, 2020 that the tournament would be postponed by one year to be held from June 11 to July 11, 2021. The final, which was held at Wembley Stadium in front of over 60,000 fans, was won by Italy on penalties against England, marking the nation's second title at the European Championships. The European Championships first took place in 1960 and have taken place every four years since. So far, there have been 15 tournaments, making EURO 2020 (held in 2021) number 16. There was another aspect which, aside from the aforementioned postponement, set this year's championship apart from the previous editions - for the first time in the tournament's history, the matches did not take place in one (or two) countries, but across 11 countries all over Europe.

There were initially 13 countries chosen to host matches for EURO 2020. However, UEFA president Aleksander Čeferin announced in March 2021 that matches would only be held in stadiums which allowed spectators according to the corresponding government's coronavirus regulations. This move was aimed at aiding the already suffering revenue lost from the original postponement, as well as fostering the soccer spirit of the EUROs by allowing fans to see the games live. As a result of this announcement, Bilbao and Dublin were removed as host nations, leaving 11 remaining host cities: Amsterdam, Baku, Budapest, Bucharest, Glasgow, Copenhagen, Munich, London, Rome, Seville, and Saint Petersburg.

The semi-finals and final were held at Wembley Stadium in London and, at one point, there were even discussions about hosting the entire tournament in the UK, which 2 out of 5 Britons would have been in favor of. In the same survey, two thirds of respondents believed that proof of vaccination should be mandatory in order to attend matches as a fan. Ultimately, hosting cities had different regulations regarding attendance during the pandemic, with permitted attendances ranging from roughly 25 to 45 percent of stadium capacities. Outliers included Munich with the lowest allowed attendance of 22 percent, Baku and Saint Petersburg with 50 percent, and Budapest, which allowed full stadium attendance for some games. Wembley Stadium had the largest stadium capacity of all the EURO 2020 hosts, and was therefore unsurprisingly estimated to have the highest ticket sales.

For the second time in its history after the tournament's expansion in 2016, EURO 2020 included 24 national teams and a total of 51 matches. The teams were separated into six groups from A to F, of which Turkey vs. Italy in Group A contested the opener in Rome on June 11, 2021. Going into the tournament, the two standout nations from previous tournaments were Germany and Spain. Germany holds the record for most appearances in the EUROs, having taken part 13 times, while Spain has appeared 11 times in the tournament. Both countries are tied for most championships won with three titles each. However, there were also some new faces in this year's European Championships, with Finland and North Macedonia making their debut in the EUROs.

In terms of the assembled national squads, England had the most expensive team in the lead up to the tournament, with the national team's entire roster adding up to a market value of approximately 1.47 billion euros. Top of the list of England's squad was captain Harry Kane, who was the Three Lions' most valuable player, estimated at around 120 million euros. Of course, other nations also had their star players such as Cristiano Ronaldo of Portugal, who holds the record for most goals in EURO history, or Kylian Mbappé of France, who was estimated to be the most valuable player at the tournament in terms of market value.

The revenue of the EUROs has significantly increased throughout the decades and is the most significant national tournament on UEFA's calendar. EURO 2016 in France generated roughly 1.9 billion euros. The majority of this income came from broadcasting fees, followed by commercials rights. Since these revenue sources are not as heavily affected by the coronavirus as ticketing, it remains to be seen how badly the pandemic will affect these revenues. In 2020, it was estimated that a postponement would cause a revenue loss of 300 million euros. The latest projected target revenue for EURO 2020 stood at roughly 2.5 billion, with a target profit of one billion euros.

One of the many activities people are into while watching the games, aside from chatting on social media, searching for match details or simply working, is checking odds and betting on gambling websites. According to a recent survey in the United Kingdom, the most common way to bet on the EUROs was via an online sportsbook or bookmaker, where people tended to rely on a hunch or feeling as well as their understanding from previous results to make their selections. The most common bets during the tournament were forecast to be on individual matches and the overall championship winner.

Soccer players are celebrated for their achievements and their talent on the pitch. However, some reach celebrity status and are able to market their own brands off the pitch as well. To celebrate this year's EUROs, Statista has combined data on social media, news media articles, and transfer market values to provide a EURO 2021 - Celebrity Index in the form of a DossierPlus.

In the following 7 chapters, you will quickly find the 49 most important statistics relating to "EURO 2020".

The most important key figures provide you with a compact summary of the topic of "EURO 2020" and take you straight to the corresponding statistics. 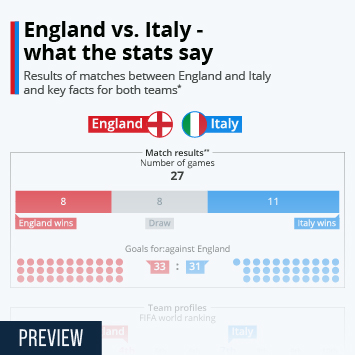 England vs. Italy - what the stats say 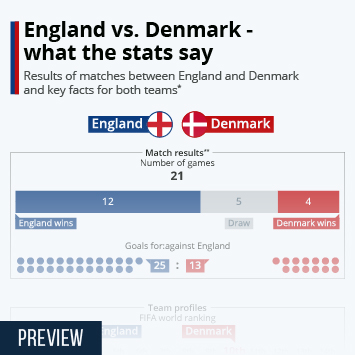 England vs. Denmark - what the stats say