Italian former football coach Arrigo Sacchi once said that soccer is the most important of the unimportant things. Whether one agrees or not, a survey revealed that the interest level in this sport in Italy is significantly high, as roughly six in ten Italians claimed to be interested in soccer in 2020. However, more than a half of female respondents claimed not to follow the sport. Overall, figures compiled by the Italian Football Federation (FIGC) confirm the popularity of soccer in the country, as the FIGC recorded over one million registered players in the 2018/2019 season.

Italy is part of the so-called Big Five, namely the biggest top-tier soccer leagues in Europe. Between the 2014/2015 and 2018/2019 seasons, the aggregated production value of Serie A, Serie B, and Serie C – the three major Italian football championships – increased gradually. So did the cost of production, leading to a net loss of 395 million euros in 2018/2019.

Looking at the aggregated revenues of Serie A, Serie B, and Serie C, data show that broadcasting revenues are the most important source of funding for professional soccer in Italy. Moreover, income generated by sponsorships rose steadily between 2014 and 2019. As of 2019, services and consultancy businesses accounted for the highest share of soccer sponsorships in Italy, followed in the ranking by food companies, and healthcare firms.

Serie A value and online presence

When breaking down the aggregated financials figures by league, the economic gap between Serie A and the other two professional championships is clear. As of the 2018/2019 season, the production value of Serie A was roughly ten times higher than Serie B. Overall, the market value of the highest league in Italian football amounted to 4.5 billion euros as of July 2020.

In terms of market value, Juventus FC topped the list of the most valuable Serie A clubs, followed in the ranking by FC Internazionale Milano, SSC Napoli, AS Roma, and AC Milan. These five Serie teams also recorded the strongest online presence. In this respect, Juventus registered the highest number of likes on its Facebook page and was also the Serie A club with the largest fanbase on Instagram as of June 2020. In both cases, AC Milan ranked second, and Inter Milan third.
This text provides general information. Statista assumes no liability for the information given being complete or correct. Due to varying update cycles, statistics can display more up-to-date data than referenced in the text.
Published by Statista Research Department, Dec 3, 2020

Aggregated revenues of professional soccer leagues in Italy 2014-2019, by source

Production value of the Serie A soccer league in Italy
3.3bn EUR

Market value of Italian Serie A clubs as of September 2022, by club 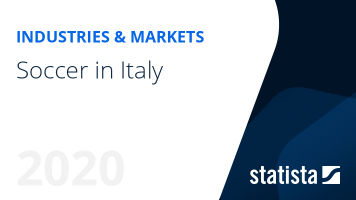 The most important key figures provide you with a compact summary of the topic of "Soccer in Italy" and take you straight to the corresponding statistics.

Serie A stadiums and attendance