Published by Statista Research Department, Nov 16, 2020
The 2018 FIFA football World Cup tournament, which took place in Russia between June 14 and July 15 2018, was the 21st edition of the quadrennially held international soccer competition. It was the first time the competition was held in Eastern Europe, as Russia became the eighth European nation to host the tournament. The selection of Russia as host of the world cup makes them the largest country geographically to ever host the tournament, while Qatar—the succeeding host nation, scheduled to host the tournament in 2022—will not only become the first Middle-Eastern nation to host the tournament, but will also become the smallest country geographically to ever do so.
Thirty-two teams representing 32 countries, including the host nation, took part in the tournament. The tournament was hosted across 11 cities, ranging from Kaliningrad in the very west, to Ekaterinburg in the east. The Russian capital of Moscow hosted the final game on July 15th, 2018. Unsurprisingly, the capital is also home to the largest stadium, with the Luzhniki Stadium holding a capacity of 80,000. Ticket prices for the matches range from 20 U.S. dollars for the lowest category for an early group match, to over 1,000 dollars for the highest category for the final.

Germany head into the tournament as one of the hot favorites, having won the previous World Cup in Brazil in 2014, and going into the tournament as the top-ranked national team in the world. One team that won't be taking part in the tournament in 2018 is the United States, who disappointingly failed to progress from their CONCACAF qualification group. However, it seems that this disappointment is not shared across the country as, in a December 2017 survey, 52 percent of respondents stated that they would not have watched the World Cup even if the United States had qualified. In addition, 63 percent of respondents stated that they were not at all interested in the World Cup, while only eight percent stated that this event was one of their top interests.

In the following 6 chapters, you will quickly find the 57 most important statistics relating to "2018 FIFA World Cup".

The most important key figures provide you with a compact summary of the topic of "2018 FIFA World Cup" and take you straight to the corresponding statistics. 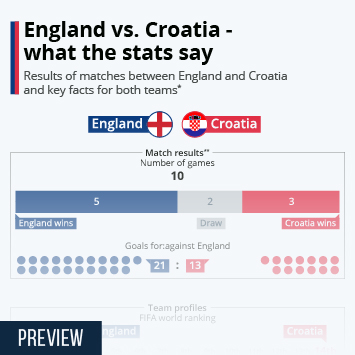 England vs Croatia what the stats say 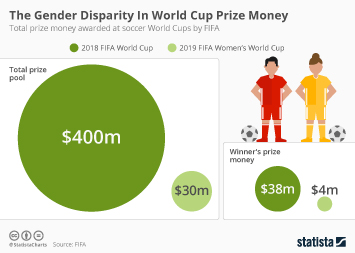