Published by
Eloise Trenda,
Oct 1, 2021
Convenient and quick to prepare, ready meals are dishes that only need to be reheated or require very little preparation before being consumed. They can be found in different packaging: canned, vacuum-packed, or frozen. These ready-to-eat products are distributed in many stores.
The French market for frozen and ready meals is not particularly dynamic. Indeed, ready-to-eat meals are sometimes perceived as unhealthy by part of the population. Furthermore, because of issues such as the 2013 horse meat scandal, consumers are more careful when making their purchases.
As a result, the innovations in this market are numerous. Most manufacturers are now offering new vegetarian and gluten-free ranges, and some are even investing in biodegradable packaging. Additionally, there is now an increased diversification of recipes, both in quantity and quality, and of the foods used - meat, vegetables, seafood, fish - to suit the new market segments with higher quality requirements. Nonetheless, French people continue to favor hyper and supermarket brands over more expensive ones.

With a revenue of nine billion euros in France, frozen foods have an impact on the national consumer goods landscape. Potatoes - regardless of shape and sizes - are the highest-selling items on the French market, followed by other vegetables.
Frozen fish, on the other hand, is not as successful. Between 2010 and 2019, the sales value of frozen seafood decreased by over 278 million euros. However, this phenomenon does not mean a growing distaste for sea products, only the frozen kind. In fact, the sales value of seafood-based chilled ready meals has been increasing in the past decade.

Incidentally, even though current food trends mainly focus on organic and sustainable consumption, frozen food enjoys a positive image in the country. Moreover, French consumers also praise the ease and time-saving nature of these products, among other qualities. As more manufacturers are focusing on the health aspect of frozen and ready meals, initially reluctant consumers may cross the line towards convenience in the near future.

In the following 5 chapters, you will quickly find the 36 most important statistics relating to "Frozen and ready meals France". 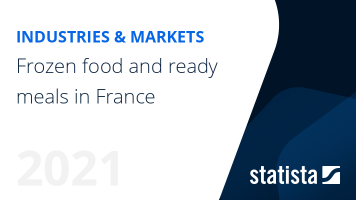 The most important key figures provide you with a compact summary of the topic of "Frozen and ready meals France" and take you straight to the corresponding statistics.