Jeans in the UK - statistics & facts

Today, both denim and jeans can be found all over the world, with the United Kingdom included. In 2023, the market size of denim worldwide was forecasted to reach 105 billion U.S. dollars. Of this, the product type with the largest share were jeans.

Todays jeans are popular as they are relatively inexpensive, trendy garments which pair easily with other items. They are a highly globalized item and have crossed all social classes and borders. In the UK, the manufacture of womens’ and girls’ jeans has decreased in recent years. Between 2008 and 2018, the volume of women’s and girls’ jeans produced has decreased more than tenfold. The same can’t be said for men’s and boys’ jeans, as the sales value and sales volume spiked in 2016. Since then, the manufacture has remained constant.

Trade and retail of denim

Although the UK manufacture of women’s and girls’ jeans decreased, the import of these garmets to the UK has increased. This corresponds to the jeans demand, as they remain as popular as ever. In 2019, roughly 406 million British pounds worth of these jeans were imported to the UK. The export value of women’s and girls’ jeans in the United Kingdom has increased significantly since 2016, where it nearly doubled in value from the previous year. As of 2019, the export value totals 128 million British pounds. The trade of men’s and boys’ jeans to and from the UK was relatively unchanged compared to women’s and girls’.

The majority of consumers in the UK spend less than 25 British pounds on their jean purchases. The most popular jeans brands are Primark, M&S, and Next. Levi’s, one of the most popular jeans brands in the world, performed well with UK consumers. Jeans can now be found in a series of different styles, colors, and cuts, and the many jeans brands serve to accommodate all consumer choices.
This text provides general information. Statista assumes no liability for the information given being complete or correct. Due to varying update cycles, statistics can display more up-to-date data than referenced in the text.
P. Smith
Research expert covering apparel industry and general merchandise
Get in touch with us now
Published by P. Smith, Jan 12, 2022

Value of the global denim jeans market 2027, by channel

Market size of the global denim market 2019-2023, by gender segment 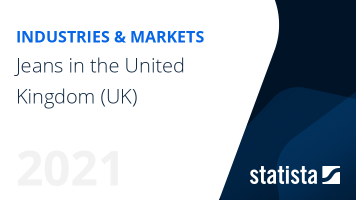 The most important key figures provide you with a compact summary of the topic of "Jeans market in the UK" and take you straight to the corresponding statistics.