Public broadcasting represents all television channels, radio stations and other electronic media whose primary mission is public service. These institutions are generally partially or wholly owned by the state or any other public institution. In France, the three national companies France Télévisions, Radio France and France Médias Monde are the first representatives of French public broadcasting. They are involved in the production and broadcasting of public television and radio content on French airwaves.
France Télévisions includes many television channels and is the leading audiovisual group in terms of audience. Its offer includes generalist channels such as France 2 or France 3, channels specialized in entertainment such as France 4 and continuous news channels such as France Info. France Télévisions also has interests in international and overseas channels, and owns a Twitch channel as well as websites.

While France Télévisions is the leader in public broadcasting for television content, Radio France manages the public radio stations in France, in addition to a music label. The Radio France group topped the rankings of digital radio groups, both in terms of number of plays and listening hours.

In addition to France Télévisions and Radio France, the France Médias Monde group stands out as one of the most important players in public broadcasting. Unlike the latter, France Médias Monde focuses on managing the programming and broadcasting of French-language television and radio content abroad. The group also owns 24-hour news channels such as France 24.

Other channels offer more specific content for free. The Franco-German channel Arte, for example, specializes in cultural programming for a French and German audience and its programs are broadcast in both languages. TV5 Monde is a general-interest French-speaking television channel that is jointly owned by Belgian, Swiss, Canadian, Quebec and French public broadcasting companies.
This text provides general information. Statista assumes no liability for the information given being complete or correct. Due to varying update cycles, statistics can display more up-to-date data than referenced in the text.
Published by Statista Research Department, Jul 13, 2021

Share of households owning at least one television set
92%

Number of national pay-TV channels in France 2020, by genre

Advertising revenue of public TV channels in France 2020, by group 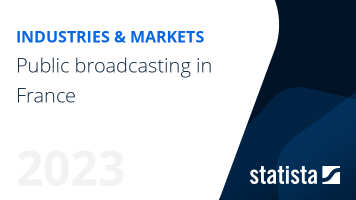 The most important key figures provide you with a compact summary of the topic of "Public broadcasting in France" and take you straight to the corresponding statistics.