Published by
Evgenia Koptyug,
Jun 22, 2022
Television is still very popular in Germany and remains one of the most used type of media. In 2020, 72 percent of the German population watched TV. Average daily TV viewing time varied across age groups, though German viewers averaged around four hours a day. The number of households in Germany with TV reception has remained stable during the last decade. These households differed by type of reception, though the most widespread were cable TV and satellite.
As in some other countries, German television is split into public service, private and paid (pay TV) broadcasters. Public broadcasters are funded through fees from viewers, which are collected by a central authority, ARD ZDF Deutschlandradio Beitragsservice. The name already includes three out of Germany’s nine public broadcasters. Meanwhile, the bulk of private broadcaster revenue is generated through advertising. In 2021, among German television channels, RTL achieved the highest ad revenue at around 3.46 billion euros, followed by ProSieben and Sat.1. The same year, over 6.8 million commercials were aired on German TV. Pay TV channels are available through a subscription.

The most popular TV genres among German viewers include the news, sports and travel programs. The television industry will also have to face continuing changes in consumer behavior regarding viewing, with online streaming services playing a significant role in this, as well as media consumption on mobile devices. The latter, however, is true for media usage in Germany in general.

In the following 4 chapters, you will quickly find the 32 most important statistics relating to "Television in Germany". 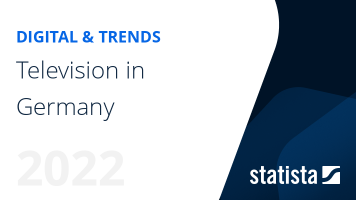 The most important key figures provide you with a compact summary of the topic of "Television in Germany" and take you straight to the corresponding statistics.