The Benelux is home to a diverse and dynamic television landscape. Due to the variety of spoken languages and other regional and cultural peculiarities, Belgium, the Netherlands, and Luxembourg all sport differences in the makeup of the TV industry and audience behavior alike. But the region also shares some interesting similarities, as daily TV usage in all three countries lay below the EU average of 77 percent in early 2022. While television remains a popular form of entertainment, the revenue of the Benelux TV market is set to decline in the future as streaming services continue to draw more viewers every day.

The Belgian TV landscape is unique in that there are no national TV networks but a variety of channels that cater to the Dutch-, French-, or German-speaking community. In 2021, Een was the leading Dutch-speaking TV channel in Belgium, while La Une ranked first among Belgium’s most popular French-speaking TV stations. Boosted by the extensive news coverage during the coronavirus (COVID-19) pandemic in early 2020, the average daily time spent watching TV in Belgium surged among both Dutch- and French-speaking audiences, who boasted longer hours in front of the television than viewers in the Netherlands and Luxembourg alike.

In 2021, some 82 percent of the Dutch population watched television every day. Average daily TV consumption in the Netherlands was reported at 154 minutes, showing less audience engagement than in the early 2000s. As younger generations increasingly favor non-linear forms of entertainment, television reach and appeal remain highest among older viewers, a trend that can be observed throughout Europe and many other regions. So which channels keep Dutch audiences entertained? In 2021, public broadcaster NPO 1 was the leading TV channel in the Netherlands, with a market share of nearly 25 percent.

The Grand Duchy of Luxembourg is by far the smallest country in the Benelux region. With a much lower population count than Belgium and the Netherlands, it comes as no surprise that the number of TV viewers in Luxembourg cannot match its two counterparts. Similar to other markets, daily TV viewing time in Luxembourg has steadily declined in recent years. At an average 131 minutes per individual, the country had one of the lowest linear TV consumptions across Europe in 2020. Despite all that, Luxembourg is home to the RTL Group, one of the largest media conglomerates on the continent. Many of the company’s channels enjoy great popularity throughout the Benelux region, with RTL Télé Lëtzebuerg being the leading TV channel in Luxemburg by a significant margin.
This text provides general information. Statista assumes no liability for the information given being complete or correct. Due to varying update cycles, statistics can display more up-to-date data than referenced in the text.

Julia Stoll
Research expert covering TV and video media
Get in touch with us now
Published by Julia Stoll, Jun 10, 2022

Share of EU27 consumers watching TV on a TV set
77%

Benelux country with the highest trust in TV
Belgium

Trust in television in Europe 2022, by country 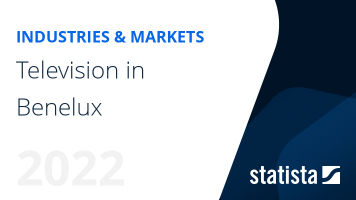 The most important key figures provide you with a compact summary of the topic of "Television in Benelux" and take you straight to the corresponding statistics.