Published by
Catharina Klein,
May 25, 2022
Water is one of the most valuable resources in the world and is vital for all known forms of life. In Japan, over 98 percent of the population had access to drinkable tap water, and the average daily water consumption per capita stood at around 287 liters. The majority of tap water was supplied using waterworks, while a smaller amount was supplied with small-scale water supply systems as well as private water supply systems.
The Japanese government strictly regulates tap water under the Water Supply Act, which was first enacted in 1957. To ensure the supply of safe and drinkable water for the citizens, the law regulates all water supply systems, the construction of water supply facilities, as well as hygienic measures.

Water consumption and usage in Japan

Usually, the agriculture sector is the most water intense, followed by the industrial sector, while the residential sector has a smaller water demand. Within the Japanese manufacturing sector, the pulp and paper products industry had the largest demand for water, followed by the chemical industry. The coastal Kanto region remained the region with the highest water consumption, likely because the metropolitan area of Tokyo is densely populated and constitutes one of the main industrial centers on the archipelago.
Furthermore, water is utilized to generate green electricity. Water energy, also known as hydropower, is energy that is generated from moving water such as rivers and streams. In recent years, hydropower represented the second largest renewable energy source in Japan, following solar power. But since the conventional hydropower potential is almost fully developed, a further increase in capacity is hardly possible.

Wastewater and water pollution in Japan

Wastewater is water that has been polluted by human activity, ranging from water used in households for flushing toilets and washing clothes, as well as water used in manufacturing processes in the industrial sector. Over 92 percent of the Japanese population are served by wastewater treatment systems. Sewer lines represent the most widely accessed wastewater treatment facilities, while a small amount of the citizens is served by septic tanks, drainage systems, and community sewers.
Water pollution has become an environmental issue worldwide. In Japan, oil represented the largest cause of marine pollution cases. Plastic waste, mostly caused by disposable plastic products such as food containers and plastic shopping bags, was a common source of water pollution as well. The Japanese government first enacted the Water Pollution Control Law in 1970 to prevent and control water pollution by regulating the discharge of effluent, monitor water, and compensate for damages. Furthermore, the government started to invest in pollution control technologies, domestic wastewater treatment systems as well as educating the public and businesses about the importance of reducing, recycling and reusing waste with the so-called 3R campaign.

In the following 7 chapters, you will quickly find the 32 most important statistics relating to "Water industry in Japan". 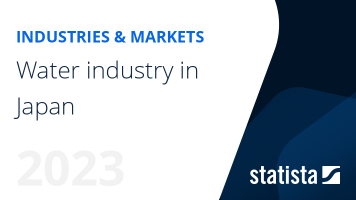 The most important key figures provide you with a compact summary of the topic of "Water industry in Japan" and take you straight to the corresponding statistics.