Out-of-pocket expenses are generally defined as medical expenses that are not reimbursed by insurance, which includes deductibles, coinsurance, and copayments. Usually, the insurance premium, referred to as the employee’s contribution to the premium, is not included. Therefore, even if someone has health insurance, there may still be a large amount to be paid out-of-pocket for health care services. Total out-of-pocket health care payments in the U.S. continue to increase and were projected to surpass 400 billion U.S. dollars for the first time in 2020.

The percentage of uninsured adults in the United States decreased from 20 to 13 percent between 2010 and 2020. Understandably, there was a slight rise in the share of people with health insurance, but more noticeable was the increase in adults who were underinsured. The Commonwealth Fund considers a person to be underinsured if their deductible is equal to five percent or more of income. Alternatively, for people living under 200 percent of the federal poverty line (the low-income bracket), underinsured refers to an individual whose out-of-pocket expenses, excluding premiums, are equal to five percent or more of their income. A 2020 survey found that around half of U.S. adults had medical bill or debt problems if they were uninsured or underinsured in the past year.

What is not covered by health insurance?

A deductible is what needs to be paid by an insured person for the year before their insurance starts covering them. In 2020, the percentage of covered workers with a deductible for single coverage was more than 80 percent, compared with just over half in 2006. Even after a deductible is reached, most insurance plans have further cost-sharing components in the form of coinsurance (a percentage of the health service cost the enrollee must pay) or copayments (a set amount an enrollee must pay for each service). Among covered workers with a copayment for a physician office visit, the most common cost is between 20 and 30 U.S. dollars. An out-of-pocket maximum is the upper amount the worker must pay in a year for all health care costs. Once the limit is reached, the insurance company would then pay for all other health care costs that the plan covers. A survey looking at the percentage of U.S. workers in individual plans with an out-of-pocket maximum found that nearly two-thirds of employees were enrolled in plans with a limit of 3,000 U.S. dollars or more in 2020.

Rising health care costs and the threat of medical debt

Out-of-pocket costs are rising at much faster rates than workers’ wages in the United States, and this is one reason why so many people who have health insurance find themselves in medical debt. According to a 2021 survey, nearly 40 percent of U.S. adults have a medical-related debt. Due to all of the financial challenges, decisions regarding a visit to a doctor or receiving specialist care can come down to cost, leaving many people without the care they need. Since 2014, the percentage of U.S. adults who go without health care due to cost has been around 35 percent.
This text provides general information. Statista assumes no liability for the information given being complete or correct. Due to varying update cycles, statistics can display more up-to-date data than referenced in the text.
Published by Statista Research Department, Aug 30, 2022

Health Insurance in the U.S.

Average amount of deductibles and copayments

Total out-of-pocket spending in the U.S. 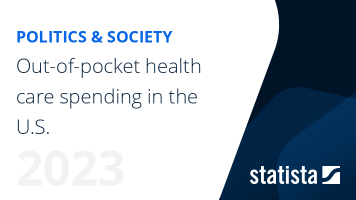 The most important key figures provide you with a compact summary of the topic of "Out-of-pocket health care spending in the U.S." and take you straight to the corresponding statistics.