Published by Statista Research Department, Aug 30, 2022
Medical debt results from the high or unexpected health care expenses that an individual is unable to pay. It is a significant and growing problem in the United States where public health insurance programs are only available to certain groups of people, mainly the elderly through Medicare and those with low income through Medicaid. By contrast, people in Western Europe and other developed countries like Japan and Australia benefit from some form of universal health coverage that protects them from unaffordable health care costs.

Health insurance in the United States

How many people have medical debt, and what do they owe?

A report by the Centers for Disease Control and Prevention (CDC) found that the share of persons in U.S. families that had problems paying medical bills was around 15 percent for both men and women in 2018. A different survey in 2020 found that emergency room visits, trips to doctors or specialists, and childbirth or related care were the main sources of medical debt among U.S. adults. Among insured adults with medical debt, most owed less than 2,000 U.S. dollars in 2018, regardless of the type of coverage. However, the percentage of American adults who owed medical debts of 10,000 U.S. dollars or more was 10 percent among those in employer plans and 17 percent for those with Medicaid coverage.

How to solve the problem of medical debt in the United States?

One way of solving the medical debt problem could be to enhance health insurance coverage for everyone through a single-payer health care system. Over the last few years, public support and opposition for a Medicare-for-all national health plan has remained fairly consistent. However, changes to the U.S. health system are a highly politicized issue and are difficult to implement. On an individual level, many people are unaware that they can try to lower their medical bills. According to a 2021 survey, the percentage of U.S. adults with medical debts who had successfully negotiated their bill was 60 percent, while 32 percent of respondents were partially successful. Many hospitals are adding to the financial problems of patients by suing them. Data collected on the number of court actions taken by the largest hospitals in the U.S against patients with unpaid bills revealed a striking finding: Between 2018 and 2020, 97 percent of court actions were filed by just 10 of the 100 hospitals analyzed, seeking millions of dollars from patients. Partly due to negative publicity and the COVID-19 pandemic, many hospitals have stopped this practice, but it remains to be seen whether this will last.

In the following 5 chapters, you will quickly find the 34 most important statistics relating to "Medical debt in the U.S.". 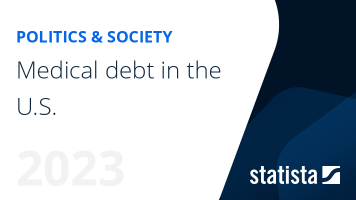 Go to report Medical debt in the U.S.
Top Seller

The most important key figures provide you with a compact summary of the topic of "Medical debt in the U.S." and take you straight to the corresponding statistics.

Sources of debt and amounts owed

Health insurance in the U.S.

Personal debt in the U.S.