Published by Statista Research Department, Aug 30, 2022
The United States spends more on health care than any other country. Annual health expenditures stood at over four trillion U.S. dollars in 2020, and personal health care expenditure equaled 10,202 U.S. dollars per resident. Federal and state government budgets are being further stretched by the coronavirus outbreak, which is pushing health expenditures even higher. Many Americans likely faced job-cuts or illness causing them to lose their employer-based private health plans. With incomes dropping, more people became eligible for Medicaid, which is reflected in the large increase in Medicaid enrollment since the pandemic started.

National health expenditures can be studied in three ways. Firstly, spending can be categorized by health care goods and services. Hospital care and physician services have been the leading spending categories for several years and combined, they account for more than half of all health spending in 2019 – the average cost of an inpatient day at a U.S. hospital was more than 2,100 U.S. dollars in 2019. The debate over drug prices shows no sign of stopping. There are concerns about the pricing policies of pharmaceutical manufacturers and growing calls to make prescription drugs more affordable, such as allowing the federal government to step in and negotiate drug prices. Elsewhere, expenditures associated with long-term health care services are increasing to support the needs of several population groups, including older adults, individuals with physical disabilities, and those with mental illnesses.

Health spending by the bill payer is another way to analyze expenditures. In general, the payer of the health care bill can be classified into private health insurance, out-of-pocket spending, and government programs, such as Medicare and Medicaid. Private insurance is the greatest contributor, accounting for around one-third of health care expenditures. Changes to insurance policies may result in patients paying more than previous years. Out-of-pocket payments continue to increase, and this may be due to insurers moving prescription drugs to a higher copayment tier or removing certain medications from plans entirely. Higher deductibles – the amount policyholders must pay before their insurer starts to cover expenses – are another reason for higher out-of-pocket costs. Workers with employer-sponsored health insurance policies have seen their average annual deductible increase by more than 700 U.S. dollars since 2010.

How much does the federal government spend on health care?

The third way to categorize health expenditures is by sponsor or contributor, i.e., the entity that is ultimately responsible for financing the bill. Premiums, payroll taxes on earnings, and general tax revenues are all used to fund health care in the United States. Federal, state, and local governments make significant contributions to national health expenditures, with the federal government’s share amounting to nearly 30 percent of the total amount in 2019. The majority of people in the United States have private health insurance through their employer, and this coverage is financed through premiums. In employer-based insurance plans, both employers (business sector) and employees (household sector) make premium payments – employers contributed around 77 percent of those costs in 2019.

In the following 6 chapters, you will quickly find the 24 most important statistics relating to "Health expenditures in the U.S.".

The most important key figures provide you with a compact summary of the topic of "Health expenditures in the U.S." and take you straight to the corresponding statistics.

Medical debt in the U.S.

Health insurance in the U.S.

Hospitals in the U.S 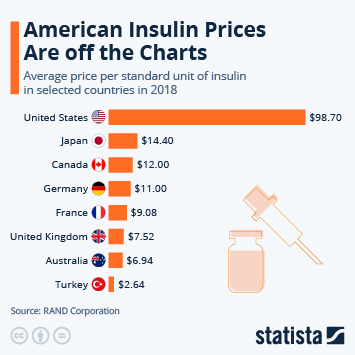