The food service industry plays a key role in the culture and economy of Spain, as shown by the eating out spending habits of its population. Even during the first year of the COVID-19 pandemic, the country had one of the largest share of total household expenditure on food and beverages consumed out of home in the European Union. A large portion of that expenditure was destined for bar and coffee shop services, while restaurants ranked as the second most popular food service establishments. In 2020, Spaniards and visitors in the country spent close to 15 billion euros consuming food and beverages in those establishments.

Big names in the market

Spanish gastronomy is one of the richest worldwide, so much so that —as part of the Mediterranean diet— Spanish food was recognized by UNESCO as an Intangible Cultural Heritage in 2010. However, the food service offering in Spain is so much more than just its typical food options. For instance, the European country is home to one of the leading non-U.S. American fast-food chains worldwide: Telepizza. The company's outlet network has experienced uninterrupted growth since its foundation, surpassing 1,300 franchised and owned units across Europe, Latin America, the Middle East, and Africa in 2021. Telepizza is managed by the multi-brand group Food Delivery Brands, which ranked among the leading Spanish restaurant companies in 2020, with sales close to 158 million euros. However, big household names like the subsidiaries of Burger King and McDonald’s, as well as the owner of Domino’s Pizza in the Iberian country, Grupo Zena Pizza, recorded larger revenues in Spain that year.

Eating out in Spain: when and why?

One of the key features of the Spanish people’s eating habits is the “siesta” or lunch nap. Across the country, businesses usually close between 2pm and 4pm to dedicate time for the mid-day meal. Despite this, lunch was the most common meal consumed outside the home in Spain in 2021. Late dinner hours are also a characteristic of the nation’s food traditions, which match its festive and open culture. In the same year, celebrations, parties, or leisure plans were responsible for nearly 30 percent of the consumption of food and beverages outside the home in Spain.
This text provides general information. Statista assumes no liability for the information given being complete or correct. Due to varying update cycles, statistics can display more up-to-date data than referenced in the text.

Number of employees in food and beverage service
1.1m

Employment in food and beverage service activities in Spain 2010-2020

Out-of-home food and drink consumption in food service outlets in Spain 2021, by type 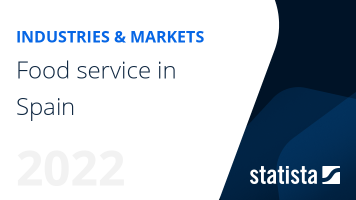 The most important key figures provide you with a compact summary of the topic of "Food service in Spain" and take you straight to the corresponding statistics.