Published by
Marina Pasquali,
Nov 17, 2022
Ever had one of those days when you just don’t feel like cooking? With the rise of digital technology, it is now easier than ever to order food online through the use of apps and websites. Online food and grocery delivery platforms offer customers the chance to order food from home quickly and conveniently, including everything from groceries to curated food boxes and prepared meals. Particularly since the COVID-19 pandemic, the online food delivery industry has cemented its position as one of the leading e-commerce sectors in Europe. In 2021, this market turned revenues for around 36 billion U.S. dollars, almost ten billion more than the previous year. By 2025, the European market for online food delivery is expected to exceed 60 billion dollars, as a large share of consumers in the region intend to continue using delivery options even once the pandemic comes to an end. Such development makes it one of the fastest-growing segments in European e-commerce and the overall consumer goods sector.

Biggest players and where they operate

The largest European market for food delivery can be found in the United Kingdom, with revenues from online food delivery projected to mount to nearly 15 billion euros by the end of 2022. Already popularized by its success in the United States, Uber Eats has also found a place to stay in the UK, achieving nearly six million app downloads in 2021, ahead of local players Deliveroo and Just Eat. However, in terms of restaurant and food delivery bookings, most UK consumers were using Just Eat for their orders throughout 2021.

The Dutch-born Just Eat Takeaway.com and its subsidiary brand, Lieferando, didn’t only lead in usage among British and German consumers. Just Eat was also the most cited online food delivery service among Italians. In Spain, on the contrary, Just Eat lost the first spot to Madrid-based Telepizza, which captured half of food delivery bookings placed by Spaniards in 2021.

A cradle for startups

Big players are not everything when it comes to a market as broad and encompassing as online food delivery. There has been steady growth in invested capital into European food tech startups in the past decade. Early-stage companies such as Picnic and Simple Feast saw a total of 2.2 billion euros invested in 2019 and another 2.4 billion in 2020. As more niche brands develop for food delivery options, grocery delivery has also become much more common throughout Europe. In the second half of 2021, European startups attracted the largest amount of funding in the online grocery and meal delivery segment, even surpassing Asia and North America.

In the following 5 chapters, you will quickly find the 31 most important statistics relating to "Online food delivery in Western Europe". 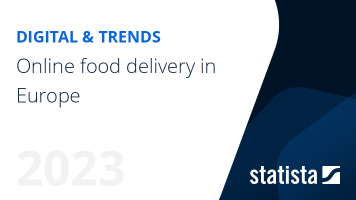 The most important key figures provide you with a compact summary of the topic of "Online food delivery in Western Europe" and take you straight to the corresponding statistics.