Published by
Eloise Trenda,
Nov 21, 2022
The wine sector is extremely relevant in Spain, not only from an economic and environmental point of view, but also socially and culturally. No matter if red, white, sweet, or fortified, wine in general is one of the favorite drinks to accompany traditional tapas, and that also qualifies as a key element in Spanish socializing. Broadly speaking, under the Spanish classification system, wines are categorized into Denominación de Origen Protegida (Protected Designation of Origin, PDO), such as the popular Rioja or Ribera del Duero, Indicación Geográfica Protegida (Protected Geographical Indication, PGI or local wines) and Vino de Mesa (table wine). The most consumed wines in the country do not have any certification and are for the most part still wines. Also, reds are generally preferred over whites or rosés.
Along with Italy and France, Spain is among the world's leading wine producers. In fact, in 2020, Spain ranked third on the list of wine producing countries, with an output of about 40.7 million hectoliters in 2020. Regionally, Castilla-La Mancha is the Spanish autonomous community in which the most wine is produced by far.

With regard to consumption and spending, Spaniards are neither the ones who consume the most, nor the ones who spend the most on wine. Spending on this alcoholic beverage remained stable between 2010 and 2019, with, however, a noticeable increase in 2020. The Balearic Islands, an autonomous Spanish community that registered the highest per capita expenditure on wine, averaging at 10 euros higher than the national average. Finally, the main players in the wine trading industry in Spain include J. García Carrión and Freixenet, both with sales values of more than 400 million euros in 2020.

In the following 4 chapters, you will quickly find the 18 most important statistics relating to "Wine market in Spain". 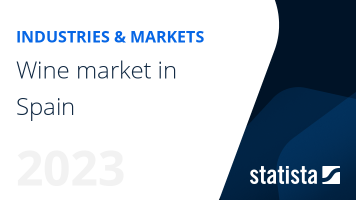 The most important key figures provide you with a compact summary of the topic of "Wine market in Spain" and take you straight to the corresponding statistics.