The pet industry in Japan is supplying a variety of market segments ranging from general supplies through fashion goods up to wellness services. As animal companions are increasingly integrated into the modern household system and treated as family members, expenses for a pet are not dictated by cost-effectiveness anymore. Instead, owners are spoiling their furry friends, with childless households considering pets as an alternative to raising a child. In an aging society struck by the challenges of fertility decline, the number of cats and dogs kept in private households has long exceeded the number of children.
However, the growth of the strongly profit-oriented pet market resulting from the pet boom has raised concerns for animal rights. This resulted in the Ministry of Environment tightening regulations on businesses and pet owners to ensure the wellbeing of the animals.

The Japanese pet market is divided into goods and services for dogs, cats, small animals such as birds and rodents, insects, reptiles, and amphibians. Due to the popularity of dogs and cats as pets in Japan, supplies directed at their owners made up the majority of pet goods shipment. While general necessities such as pet food, sanitary products, and housing goods are staples among pet goods manufacturers, fashion and accessory items are also pronounced segments within the Japanese market. Impacted by the culture of cuteness (kawaii), dressing up dogs and cats and taking them on walks in strollers is not an uncommon sight in Japan.
Services on the other hand cover a broad range of in-store services such as beauty parlors, leisure facilities, and pet hotels, with the majority of commercial animal handlers providing short-term care services. Furthermore, dog and cat owners commonly take out pet insurances to cover the high medical fees of veterinary visits, with dog owners, in particular, visiting clinics or hospitals regularly for checkups or mandatory vaccination shots. While Japan has been considered rabies-free in recent decades, annual vaccinations remain mandatory for domestic and imported pets to prevent a resurgence in infections.

The most common pets kept in Japanese households are dogs and cats, which also topped the ranking as the most desired pet species. Other popular species include ornamental fishes, birds, and rodents like rabbits and hamsters. Additionally, unusual pets such as hedgehogs, squirrels, and beetles do not fall under nature conversation regulations and are therefore allowed to be kept in private households in Japan.
However, in a country where space is limited, especially in large metropolises, small breeds of larger animals are preferred among new owners. Coupled with the prevalence of the kawaii culture, space limitations drove the popularity of small mixed breeds, toy poodles, and chihuahuas within the dog market. The demand in turn is fueling the industry as the Ministry of Environment noted a record high in registered or reported pet breeders, with numbers having further increased during the stay-home period of the coronavirus pandemic (COVID-19).
A negative consequence of the growing pet market is the increase in pet abandonment, and Japan is struggling to contain the population of strays. Apart from the high stray cat populations on Aoshima and Tashirojima, both popularly known as Cat Island in online media, municipalities on the main island Honshu are also struggling to reduce the number of newly-born litter living in abandoned buildings and parks. Since animal shelters are rarely considered as a place to adopt a pet, animals picked up by shelters end up with an expiration date, with tens of thousands of animals euthanized per year.
This text provides general information. Statista assumes no liability for the information given being complete or correct. Due to varying update cycles, statistics can display more up-to-date data than referenced in the text.
Published by C. Diep, Mar 17, 2022 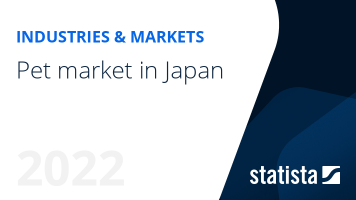 The most important key figures provide you with a compact summary of the topic of "Pet industry in Japan" and take you straight to the corresponding statistics.