Emerging markets of the Asia-Pacific region

TVs, computers, and mobile phones are staples for an average consumer. All these markets are quite saturated as almost every household owns a TV, every person owns a mobile phone, and every other person has one kind of computing device. A decade ago, mobile devices transformed the consumer electronics market. As a result, the market share of laptops exceeded desktop PCs, and now smartphones account for the largest share in consumer electronics by a remarkable margin. Today, smart devices such as smart wearables and smart streaming devices are predicted to increase rapidly in the coming years. Whether it be by satisfying new consumer demands or replacing previous technologies.
This text provides general information. Statista assumes no liability for the information given being complete or correct. Due to varying update cycles, statistics can display more up-to-date data than referenced in the text.
Published by S. Ganbold, Oct 1, 2021

Revenue of consumer electronics in Southern Asia 2016-2025, by country

Consumer electronics revenue in the Southeast Asia 2016-2026, by country

Smartphone penetration in Asia 2020, by country

Consumer electronics revenue in the Asia-Pacific region 2016 to 2026 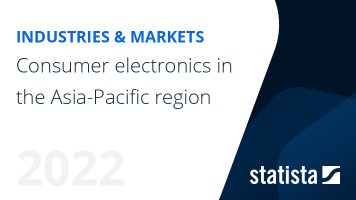 The most important key figures provide you with a compact summary of the topic of "Consumer electronics in the Asia-Pacific region" and take you straight to the corresponding statistics.