The term consumer electronics (CE) can be used to define the range of products containing electronic circuit boards, intended for personal use. However, in the past decade, it has been used more and more to designate devices specifically made for communication, entertainment, or information purposes. Lately, the digitalization of most consumer electronics has increased exponentially, which led to the merger of this market with the computer industry, a phenomenon referred to as the consumerization of information technology. The future of consumer electronics may become even more closely related to IT, since the Internet of Things (IoT) keeps bringing a sharp increase of connected devices to the market. Today’s electronic devices are not only more technologically advanced than those of 50 years ago, but also cheaper, more widely available, and more diverse. Some of the products now included in the consumer electronics category are computers, laptops, smartphones, TV sets, tablets, game consoles, speakers and headphones, wearables, digital cameras, and VR (Virtual Reality) & AR (Augmented Reality) devices.

In 2021, the television segment of the CE market reached a sales volume of 544 million units. Given the constant development of modern technologies, high-resolution TVs, such as 8K TVs are becoming increasingly popular, while smart TVs with integrated internet features have already taken the world. On the smaller-screen front, tablet shipments were forecast to reach 171 million units in 2021 - a downward development since the peak of 230.1 million in 2014. However, smartphone sales - the largest consumer electronics sector - showed no sign of slowing down. The smartphone market recorded a revenue worth 481 billion U.S. dollars in 2021 and was expected to increase to over 500 billion U.S. dollars by 2026. Wearable devices, which include fitness trackers, smart watches, and hearables, are the relative newcomer to the CE market and have embraced great consumer enthusiasm over the last years. The overall wearable market is projected to ship around 490 million units by 2023, an increase of approximately 80 percent compared to the number of shipments registered in 2020. Sales of other devices like gaming consoles and VR/AR headsets are growing strongly as well, as consumers are ever going after new and exciting experiences. In contrast, digital cameras are undergoing a sustained market decline.

Ever evolving, the consumer electronics industry is permanently growing into one of the largest markets in the world. In the United States alone, the market value of consumer electronics was projected to exceed 460 billion U.S. dollars by 2022, while global revenue is expected to continue exceeding one trillion euros in 2019. It is hardly surprising that today’s CE market’s leading tech giants are Apple and Samsung. Apple's signature product, the iPhone, is the company's most profitable product, whose sales accounted for almost half of Apple's total revenue as of the third quarter of 2021. Moreover, thanks to its iPad, Apple is the largest vendor of tablet computers, and since the release of its Apple Watch, it’s also leading the wearable market. On the other hand, Samsung Electronics is the world's biggest consumer electronics manufacturer and currently dominants the smartphone and TV market. Samsung's Galaxy Note series pioneered the phablet market, which is becoming the mainstream of smartphone models. As a major manufacturer of electronics components such as semiconductors and image sensors, Samsung is also a provider for other CE companies including Apple and Sony. Other strong players in the CE market include Sony, Panasonic, and LG Electronics.
This text provides general information. Statista assumes no liability for the information given being complete or correct. Due to varying update cycles, statistics can display more up-to-date data than referenced in the text. 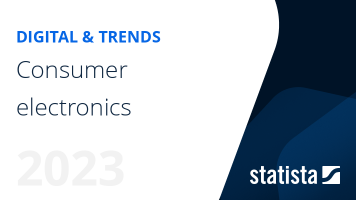 The most important key figures provide you with a compact summary of the topic of "Consumer electronics" and take you straight to the corresponding statistics.