Published by
T. Ozbun,
May 27, 2022
Today, both beef and pork are important for the modern Italian meat industry, and famous cuts of Italian meats include salami and prosciutto. In 2018, the meat industry in Italy generated a revenue of approximately 24.48 billion euros. Over the period, the production value of the processing and preserving of meat has dropped significantly in the year 2011 (20 billion euros) and peaked in the year 2017 (over 23.4 billion euros). Production value decreased again in 2018 and registered at approximately 22.7 billion euros.

Consumption of meat in Italy

While other European countries, such as Germany and France, have seen a significant decrease in meat consumption, Italy has not. In 2020, the per capita consumption of pig meat reached 32.5 kilograms per head, and remained relatively unchanged since 2016. The same is true for both beef and poultry in Italy, fluctuations withstanding. In 2019, the average monthly household expenditure on beef products totalled 30.39 euros for beef products. The average monthly expenditure on poultry products totalled 18.7 euros.

In the following 4 chapters, you will quickly find the 21 most important statistics relating to "Meat industry in Italy". 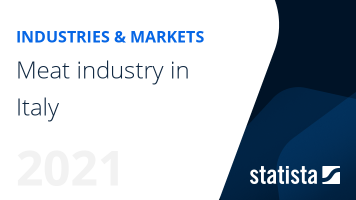 The most important key figures provide you with a compact summary of the topic of "Meat industry in Italy" and take you straight to the corresponding statistics.

Fish and seafood industry in Italy