The number of agricultural businesses in Germany has dwindled significantly since the 1970s. If there were around 904,700 businesses in 1975, in 2020 there were 256,900. On the one hand, farmers have to contend with agricultural legislation and various issues to keep their businesses alive. This is especially true after the coronavirus (COVID-19) pandemic and its subsequent restrictions, such as for deliveries to and from abroad, as well as hiring workers from other countries during harvest season. On the other hand, industrial and technological advancements have allowed for work which required copious amounts of labor in previous decades to be completed with less human interaction. Employee numbers have been decreasing in recent years, with 582,000 recorded in 2020, compared to 661,000 ten years ago. The leading expectations of the population from agricultural businesses were animal husbandry appropriate to the species and fair pay for employees.

German agriculture is making progress in the field of organic farming, which becomes ever more relevant in the context of global climate change and ongoing environmental concerns. Organic farming aims to use sustainable methods, relying on non-chemical, natural fertilizers and pesticides. These come from animal and plant waste. The challenges involved include higher product prices for consumers and therefore lower yields for producers. In 2021, there were 35,716 organic businesses in the country. That same year, 10.8 percent of agricultural land in Germany was used for organic farming.

In the following 7 chapters, you will quickly find the 70 most important statistics relating to "Agriculture in Germany". 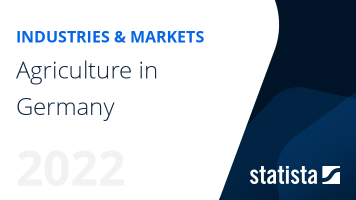 The most important key figures provide you with a compact summary of the topic of "Agriculture in Germany" and take you straight to the corresponding statistics.