88.9k
Tim Westergren, co-founder and CEO of the popular online radio service Pandora has stepped down. Following reports of Westergren’s imminent departure earlier this week, the company made an official announcement today. Having previously served as CEO between 2002 and 2004, Westergren had returned to the helm of Pandora in Spring 2016 to “drive transformation across the business”.

Having been on the forefront of the music streaming revolution, Pandora came under increased pressure from on-demand streaming services such as Spotify and Apple Music in recent years. In March 2017, the company announced its own subscription-based tier Pandora Premium in addition to its ad-based online radio service.

Pandora’s intelligent radio service, playing music based on listeners’ likes and dislikes, quickly gained popularity in the United States after its launch. However, in recent years the company has had problems finding new listeners, partly because of its geographic limitation to Australia, New Zealand and the United States. As our chart illustrates, Pandora added only 5 million users in the past three years. Spotify, the world’s leading music streaming service, added 100 million users in the same period. 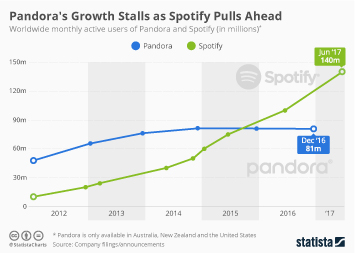 This chart compares the user growth of Pandora and Spotify.