88.9k
The share of U.S. citizens holding a passport has risen steadily over the past three decades. Indeed, 2017 was a record year with a total of 21.4 million passports issued. Putting that into perspective, a mere 6.3 million were issued back in 1997. Only 15 percent of Americans had a passport that year, though it was much higher than in 1990 when the share of the population holding one was just four percent, according to the BBC.

The growth accelerated after 9/11, particularly when Congress passed the Intelligence Reform and Terrorism Prevention Act in 2004, which mandated the development of a plan requiring all foreign nationals entering the U.S. to have a passport. Their plan was announced in April 2005 and it came into effect in January 2007. It also required U.S. citizens traveling by air between the U.S. and Canada, Mexico, Central and South America, the Caribbean, and Bermuda to have a valid passport. Previously, Americans were able to enter these countries without one. 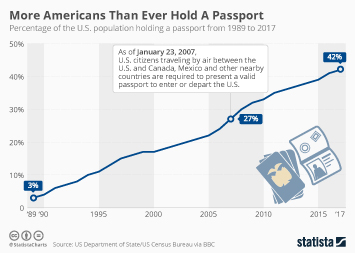 This chart shows the percentage of the U.S. population holding a passport from 1989 to 2017.