88.9k
The hajj, a 5-day pilgrimage to Mecca, Saudi Arabia, ends tomorrow. It is among the largest gatherings in the world. According to estimates from Saudi Arabia’s Director General of Passports, by Wednesday 1.8 million people had already arrived.

The hajj is a religious ritual for Muslims around the world. All Muslims who are physically and financially capable are expected to make the journey once in their lives. The annual pilgrimage retraces events from the lives of prominent prophets in the Quran, making it one of the five pillars of Islam.

The gathering of millions tests the limits of Saudi Arabia’s transportation and visa system. According to the Saudi Arabian General Authority for Statistics, about 1.6 million people flew into Mecca last year, roughly the size of Mecca itself, which is estimated to be home to 1.9 million people. Nearly doubling the size of the population creates security and crowd control concerns for authorities. Stampedes are a reoccurring problem. In 2015, a stampede killed 700 people.

While the hajj is a huge gathering, it is among the smaller celebratory or religious travel events of the year. Chinese New Year caused around 400 million people to travel this winter. While the Kumbh Mela in Prayagraj, the 50-day Hindu festival which took place this year between January and March, welcomed over 220 million worshippers. By comparison, only 54 million people traveled last year for Thanksgiving. 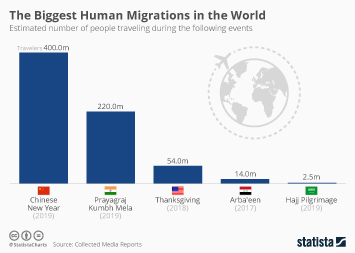 This chart shows the estimate number of people traveling during the following events (in the millions).