Even though the United States is a little further down the list, coming in at 7th place, it still yields considerable power, enabling citizens to enter 186 countries without major restrictions. It’s a level of freedom also enjoyed by passport holders in Belgium, New Zealand, Norway, and Switzerland.

At the other end of the scale, the situation is very different. For passport holders in Afghanistan, Iraq and Syria for example, travel is more restrictive to most countries. The Afghan passport wields the least power of the ranking, with just 27 destinations permissible visa-free. The situation in Iraq and Syria isn’t much better, at 29 and 30 destinations, respectively. 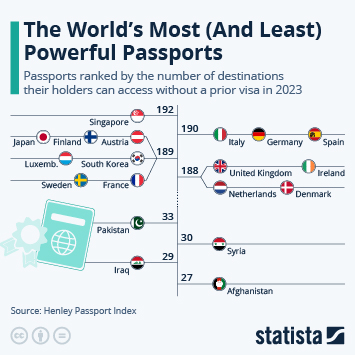 This chart compares the number of visa-free countries passport holders can visit in 2022.