88.9k
While short flights around Europe and the U.S. usually involve narrowbody aircraft like the Boeing 737 and Airbus A320, longer routes are generally handled by larger aircraft such as the Boeing 777 or Airbus A380. Due to leaps in technology, airlines are starting to employ smaller aircraft on longer routes with increasing frequency. One notable example of an airline that has done this for years is Panamanian flag carrier Copa Airlines. Due to Panama's geographic location, its older generation of 737s were able to fly over land to destinations in North and South America due to the fact that divert airports were always available in the case of a low fuel situation.

The new generation 737 Max and A320neo can now be employed on transatlantic or trans-continental routes due to huge leaps in reliability and fuel efficiency. Their increasing popuarity has seen an expansion of narrowbody aircraft handling long haul routes. Website anna.aero published some interesting statistics showing the top country markets for long-haul flights with narrowbody airlines as well as the top airlines. Given Panama's geographic location, Copa airlines is firmly in the lead with 437 weekly departures while United comes second with 310 and American airlines comes third with 210. The U.S. is the top country market with 668 departures, over three times more than second-placed Panama.

Being stuck in a small and cramped 737 or A320 for hours on end sounds like everybody's worst nightmare but airlines are moving to improve the experience for passengers. For example, Norwegian offers free WiFi while Copa Airlines has seat-back entertainment. In many cases, United has no in-flight screens but it does have device holders for passengers to watch content on their own devices. With "downsizing" becoming one of the hottest trends in commercial aviation, airlines still have a lot of work on their hands in order to convince passengers their flight will remain comfortable. However, with Norwegian offering round trips between the U.S. and Europe for $300, that price might be convincement enough. 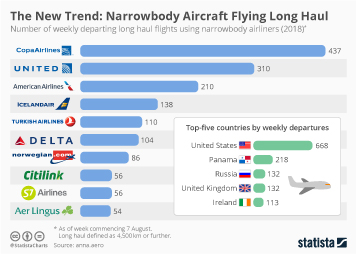