53k
74.6k
87k
88.9k
New York broke up with Amazon this Valentine’s Day. The relationship got off to a rocky start when Amazon announced the end of its HQ2 search, where New York and Washington D.C. were picked in a two-way tie. Rumblings from New York representatives about concerns around the cost of living, affordable housing, and infrastructure issues started off the fraught relationship.

New York state initially offered the company 1.2 billion in discretionary tax credits, while Virginia has offered the company around 750 million in cash incentives for choosing the three Virginia neighborhoods spread between two cities, which the company refers to as National Landing. Grassroots organizing and push back from local government officials cut off the relationship.

Amazon’s relationship to its hometown, Seattle, WA, has been complicated at best. The company has poured close to 4 billion in real estate spending into the city. Amazon is currently employing 45,000 people who have an average salary of $110,000 a year. Critics say these moves have driven up the cost of living in the city. While the tech giant has grown, it has also deferred 54 million in state taxes alone, due to a high-tech corporate incentive in Washington state. 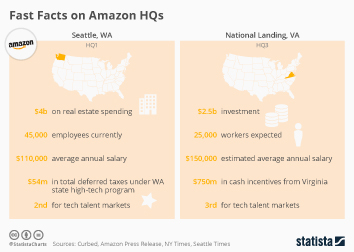