Rwanda comes first by quite a distance with its lower house 61.3 percent female as of January 2022. That is largely down to its horrific 1994 genocide which left the country with a population that was 60-70 percent female. Rwanda was forced to implement sweeping changes and open society to women, part of which involved a quota mandating that women hold 30 percent of political seats. Cuba has the second highest share of women in its legislature at 53.4 percent, followed by Nicaragua with 50.6 percent. Exactly half of the UAE's Federal National Council and Mexico's lower house is female. All of the three latter countries have gender parity laws in place for their national assemblies, while Cuba uses unofficial affirmative action plans throughout the one-party state system.

New Zealand in rank 6 uses a system called mixed member proportional representation (MMP), in which voters pick their representatives by district, but also vote for a political party. If the elected representatives' party shares and the overall party vote don't match up, the parliament is enlarged until it represents the party vote, effectively handing more power over to the parties to pick out who becomes an MP. The country's largest party, Labour, currently holding 54 percent of seats in parliament, has enacted a voluntary quota system ensuring that they send an equal amount of women to the legislature. Their coalition partner, the Green Party, even has seven women in parliament opposite three men. The second largest party, the National Party, sent 33 percent women to parliament for the current assembly, together accounting for New Zealand's high score.

In Iceland, parties also drive gender party with all four major parties enacting voluntary quotas to achieve 40-50 percent of women represented in roles within the party and on electoral lists. 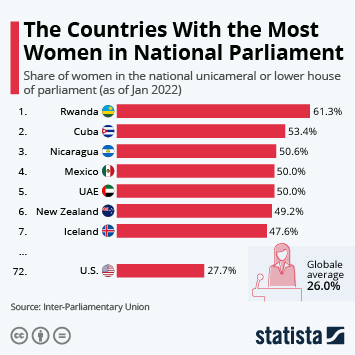 This chart shows the share of women in the national unicameral or lower house of parliament by country (as of January 2022).