88.9k
Amazon announced on Thursday that it had cancelled its plans to build a new headquarters in New York City, giving in to vocal opposition from local politicians and activists who were particularly enraged about the roughly $3 billion in tax breaks that Amazon had been offered to come to the Big Apple.

"After much thought and deliberation, we've decided not to move forward with our plans to build a headquarters for Amazon in Long Island City, Queens," the company wrote, adding that “the commitment to build a new headquarters requires positive, collaborative relationships with state and local elected officials who will be supportive over the long-term”. Apparently the company’s leadership did no longer see this given, which ultimately lead to the decision to scrap the ambitious project altogether.

Back in November, Amazon had announced to build a new campus in Long Island City, Queens, which would have created 25,000-40,000 jobs and generated $27.5 billion in additional tax revenue over the next 25 years, according an impact study jointly commissioned by the city and the state of New York.

As the following chart shows, Amazon is by far the largest employer in the tech industry, mainly thanks to its sprawling logistics network. By the end of 2018, the company employed nearly 650,000 people worldwide (incl. seasonal workers), making it the only U.S. company beside Walmart to employ more than half a million people. 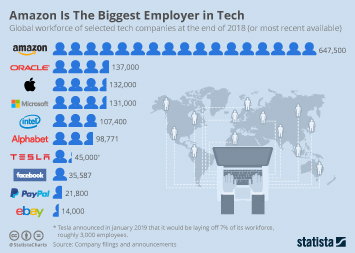 This chart compares the size of the global workforces of selected U.S. tech companies.