There are only twelve countries in the world which offer full legal protections to women, according to the report Women, Business and the Law 2022, recently published by the World Bank. Belgium, Canada, Denmark, France, Greece, Iceland, Ireland, Latvia, Luxembourg, Portugal, Spain and Sweden were the only ones offering full equal rights for men and women, at least from a legal perspective.

Spain and Greece were the newcomers among those rated at 100 points this year. Both countries equalized parental leave entitlements between the sexes.

The United States ranked at 91.3 percent below countries like Peru and Albania. It lost points because of a lack of laws guaranteeing equal pay and equal pensions in addition to having notoriously bad laws around parental leave.

Japan and South Korea ranked at approximately 79 percent and 85 percent, respectively, losing most points for the quality of laws concerning equal pay, family and entrepreneurship. Japan also only achieved 50 percent of the score for workplace equality, which includes the areas equal hiring, workplace discrimination and sexual harassment. 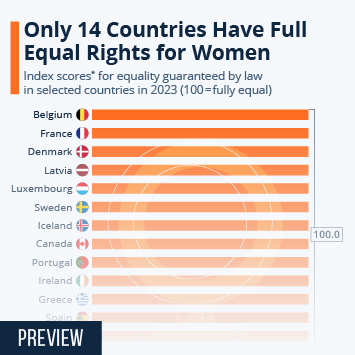 This chart shows country scores for equal rights for men and women guaranteed by law.