GDP figures by the OECD for the first quarter of 2021 show the ongoing impact the coronavirus is having on economies around the world.

China was the first economy that bounced back from its coronavirus losses. The country recorded a GDP growth of 3.2 percent as early as Q2 of 2020 and most recently even grew its economy by 18.3 percent compared with Q1 of 2020. 2020's first quarter was the only one in which China's economy shrank due to the coronavirus pandemic, which is now creating a negative carryover effect, making GDP growth in the latest quarter seem extremely high. Most other economies did not see negative GDP growth until Q2 of 2020, so this phenomenon has not occurred for them yet.

In Q4, Turkey and India had already joined China as countries whose quarterly GDP was growing again in year-over-year terms. In Q1 of 2021, South Korea, the U.S., Canada and France also joined that list of countries. France was the exception to the rule in Europe, which largely carried on with coronavirus losses as second and third wave lockdowns continued on the continent in Q1.

The U.S., which was quicker to reopen, saw Q1 GDP growth of a meager non-annualized 0.4 percent, similar to Canada's plus of 0.3 percent. A good track record of suppressing the virus also paid off for South Korea, which grew its economy by 1.7 percent, while neighbor Japan - still embroiled in returning COVID waves - lost 1.8 percent. 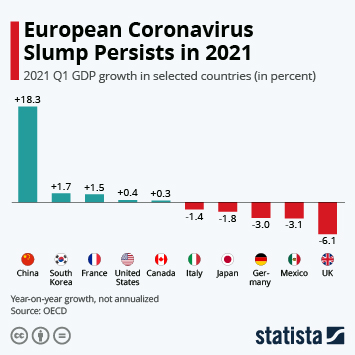