88.9k
Internet advertising revenue in the United States exceeded $100 billion for the first time in 2018. That’s according to the Interactive Advertising Bureau’s latest internet advertising revenue report, which has been tracking the growth of the online ad market for 23 years. “Surpassing $100 billion in annual revenue is a watershed moment for the digital advertising ecosystem—one built on its power to build direct relationships between brands and today’s consumers”, writes Randall Rothenberg, President and CEO of IAB.

Having grown by 22 percent in 2018, the online advertising market shows no signs of slowing down. If anything, growth has re-accelerated in recent years after a brief respite during and after the financial crisis. Some formats, such as online video and social media ads even saw growth rates significantly higher than 22 percent, as brands are shifting their budgets to match changes in media consumption. The most significant shift in recent years has without a doubt been the transition from desktop to mobile. As consumers are spending more and more time on mobile devices, advertising dollars are moving to mobile inventory as well. In 2018, mobile ads accounted for 65 percent of total digital ad revenues, up from just 9 percent in 2012.

Interestingly, the online advertising market is still highly concentrated, with the top 10 ad-selling companies accounting for 75 percent of revenues. As search and social media advertising accounts for 45 and 27 percent of total revenue, respectively, it’s not hard to guess which two companies are the dominant players in the digital advertising landscape. 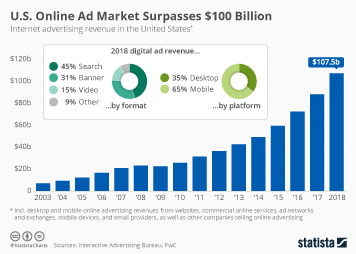 This chart shows the long-term growth of internet advertising revenue in the United States.