Skip to main content
53k
74.6k
87k
88.9k
Video games have grown to become an immensely popular form of entertainment but they have a dark side with a recent study finding players are frequently exposed to harrassment and in some cases, extremist ideology and hateful propaganda. The Anti-Defamation League released the first-of-its-kind study and it found that 65 percent of gamers who play onlinehave experienced severe harassment such as physical threats and stalking while 74 percent experienced some type of harassment.

Today, 53 percent of U.S. adults play video games and the industry is now worth $152 billion globally. Over the past thirty years or so, games have evolved from just being a form of entertainment to powerful social platforms where interactions can prove both positive and harmful. Keeping that in mind, many players did of course experience positives with approximately half of those polled saying they made friends and helped other players. 30 percent said they felt they belonged to a community while 13 percent even found their partner through gaming.

Unfortunately, like all social platforms, online gaming also experiences widespread levels of harassment. 44 percent of respondents said they were threatened with physical violence while 34 percent said they were stalked. Perhaps even more alarmingly, 29 percent reported that they had been "doxed", a term that means a stranger has shared private information during a game. The scale of the problem becomes apparent on this infographic which shows that at least half of all players of 15 of the most popular online games reported some form of harassment.

Players of Dota 2 (Defense of the Ancients 2) reported the highest rates of harassment at 79 percent while Minecraft players experienced the lowest (but a still significant) rate which was 52 percent. The report also looked at the share of players who experienced extremism, disinformation and conspiracy theories. It found that 23 percent were exposed to white supremacist ideology while 13 percent experienced some form of 9/11 conspiracy theory. 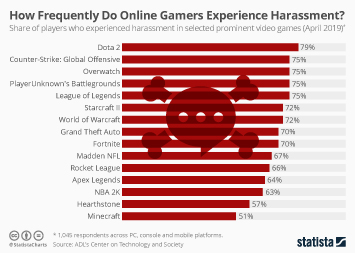 This chart shows the share of players who experienced harassment in selected prominent video games (April 2019).

Box Office in the U.S.