President Trump has signed an executive order which aims to remove some of the legal protection given to social media companies, though it is expected to face significant legal hurdles. In a nutshell, it sets out to clarify the Communications Decency Act, handing regulators the power to file legal proceedings against social media companies for the way they police content on their platforms. Trump's decision to take action comes two days after Twitter attached a fact check to one of his tweets lambasting mail-in voting. He then threatened to close Twitter down, saying that "if it were legal, if it could be legally shut down, I would do it". He also accused social media companies of censoring conservative voices, having unchecked power and of election interference.

The spat is still ongoing and it escalated early this morning when Twitter placed a violent content warning on one of Trump's tweets when he referenced the situation in Minneapolis, tweeting that "once the looting starts, the shooting starts". Trump's stance and threats to close down Twitter are ironic given that he has 80 million followers and has arguably never been more reliant on the platform. Even in the Oval Office during the signing of his executive order, Trump was asked by a journalist why he doesn't just delete his account and walk away from Twitter. He replied that he would do that in a heartbeat if it wasn't for his unfair treatment at the hands of fake news. He said he can rely on his combined social media channels of Twitter, Facebook and Instagram to bypass traditional media channels, refute fake news and reach a combined total of 186 million people.

Trump's reliance on communicating via Twitter has become more evident over the past year as he has ratcheted up his activity on the platform. According to the Trump Twitter Archive, he tweeted or retweeted 3,578 times in 2018 and that grew drastically to 6,934 in 2019. So far, 2020 has proven hugely turbulent given tensions with Iran at the beginning of the year and the spread of the coronavirus in the months since. So far in May, Trump has tweeted or retweeted more than 800 times and his total for the year is 4,474. As November approaches, that is likely to increase steadily unless the unthinkable happens and Twitter takes action beyond fact checking and violent content warnings. 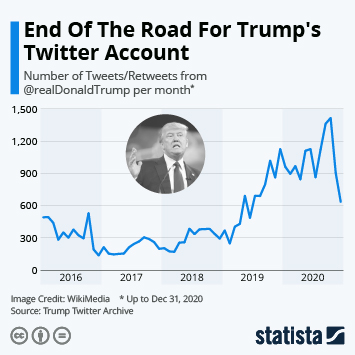 This chart shows the total number of tweets from @realDonaldTrump per month.