U.S. industrial production suffered a historic falloff in April, as the COVID-19 pandemic led many factories to slow operations or shut down completely to comply with state regulations. According to data published by the Federal Reserve, manufacturing output was hit particularly hard, dropping by 13.7 percent over March, the steepest fall in the 101-year history of the industrial production index.

At 85.5 percent of its 2012 average, manufacturing output was at its lowest level since 1997, as all major industries reported declines in output. The production of motor vehicles and parts was by far the most affected, as closed assembly plants across the nation resulted in a 72 percent output drop. Light vehicle production came in at an annual rate of 70,000, compared to an assembly rate of 11 million in February.

As the following chart shows, the drop in manufacturing output really is unprecedented with the closest similar declines record during or shortly after World World II. The worst dropoff during the last recession was recorded in December 2008, when factory output declined by 3.5 percent. 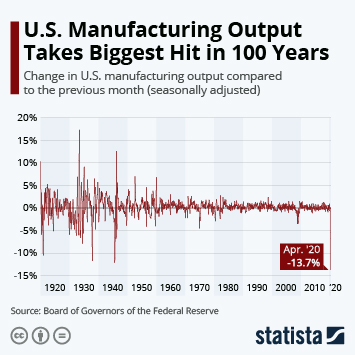 This chart shows the change in U.S. manufacturing output compared to the previous month (seasonally adjusted).